THE NEW WONDER BOY OF FASHION

With 8 shows under his belt this year, 4 fabric collections and over a 100 bridal orders for this season only, Faraz Manan is clearly the new wonder boy of Pakistan fashion. We speak to him about his struggles, the good and bad reviews and his unprecedented rise in the fashion industry in the last three years. Faraz opens up about it all.

‘I was once labelled as a glorified darzi by a journalist’ , said Faraz as we started talking about his work ‘She questioned my credentials as a designer… Yes I take inspiration from everywhere but at least no one can ever say I have copied anything’. Faraz smiled as he spoke about this. While most other designers would have been mortified at the very mention of such a review, clearly Faraz can look back at such times with no bitterness because he has had more love thrown his way in recent times than critique.

Faraz’s father was a banker and being in the corporate world he remembers him being very particular about his clothes always. His mother on the other hand was in to designing clothes for as long as he could remember. ‘She was from the UK, so we would go to London every summer to be with our grandparents. She started making clothes as a hobby for her shopping money more than anything. It was mostly for friends and family abroad’. His mother did do the clothing business more formally also later where she and his khala manufactured bridal couture for Bruce Oldfield and other London and Paris based boutiques. This was more of a manufacturing set up than a design house.

One of the perceptions people tend to hold about Faraz is that ‘he had it easy’. ‘ My struggle was very private, which is why people don’t know of the times I would take Rickshaws to Shahalam to buy my own sitaras, dabkas, dhagas etc’ no one can take me for a ride because I’ve done all the work myself when I started’. Faraz, an Aitchison alumni started working with his mother initially. While his mother was mostly focused on couture, he and his sister Sundas invested their time in making a ‘brand’. ‘This was the time when Karma, HSY, Maria B and the likes were coming into their own, it was inspiring’. 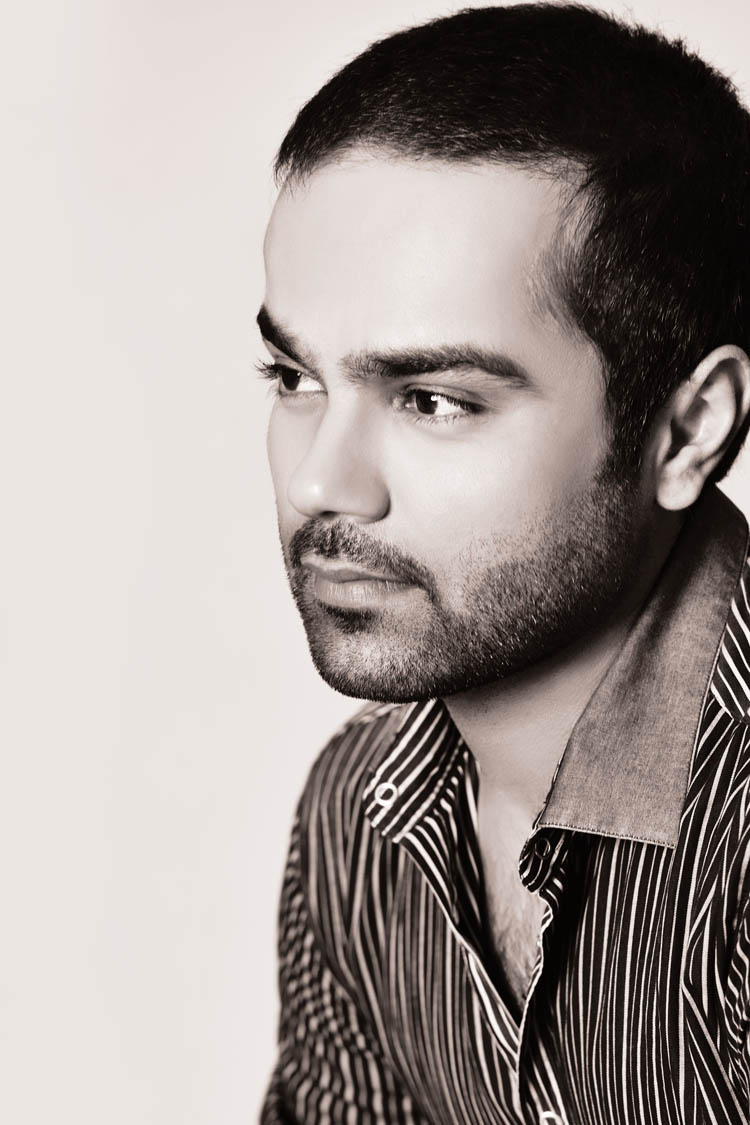 Faraz and Sundus who had worked with their mother till then, got their break one Summer when they came back from London earlier than the family and invested their time in creating a corset and skirt which would eventually put Faraz Manan on the map. The outfit was shot by Ather Shahzad with Vaneeza Ahmed. ‘I didn’t want to compromise on anything, we went to the best photographer, worked with a super model and I booked a 10 page spread in Libas’. The daughter of a diamond merchant was getting married in Dubai, having seen the advertisement she placed her bridal order with Faraz.

While Faraz has now been working for over 12 years, till 4 years ago he was very subdued and under the radar, taking only couture and bridal orders by appointment only. ‘I was constantly in transition, first we were setting up, then Sundas who had been my partner in it all was getting married…’.

Four years ago, Faraz was approached by one of his closest friends Shoaib Shafi to help out with his Lawn fabric business and one of the biggest Lawn collaborations in the country ‘Faraz Manan for Crescent’ started with just a verbal understanding between two school friends. As he had done with his debut shoot many years ago, Faraz dreamt the biggest, best that he could. The result was the memorable Karishma Kapoor campaign and the lawn with it’s fresh take on design and iconic marketing became an overnight success. Faraz has since followed it up with 3 more campaigns with Karishma and with Kareena last year. He has also launched, silks and digital prints fully entrenching himself in the fabric business.

Today the Faraz Manan brand has four key people looking after it. Shoaib and his sister Sana, and Faraz and his sister Sundas looking after different aspects of designs, marketing and business. ‘It’s not about me, it’s about creating a sustainable fashion brand that lives on long after we’re all gone… it’s about creating a fashion legacy’. Faraz feels that this has been the fall of most design houses that they’re very personality driven… ‘ I want this to be a business of fashion, not a design house’. Crediting Shoaib he says that he is the one with the truly enterprising mind ‘It’s a great working combo, I’m the dreamer and he is the business guy – I think visuals and he thinks numbers’.

In three years Faraz has gained more than most haven’t even in a lifetime. His inspiration throughout this time remains his never ending fascination with the Nawabs. The Faraz Manan man or woman is educated, cultured and breezes easily between the West and East. ‘ They can wear a Coco Chanel dress with the same ease as they can a beautiful saree. They associate easily with old and young, rich and poor alike. They have a depth in their personality and exude class not flaunt money’.

Despite his star status recently, Faraz remains shy and weary of the spot light. ‘I can’t be friends with people I can’t relate to. I don’t feel the need to network… I have some great friends in the industry and outside it but I surround myself with people who understand me… I’m not superficial I’m very reserved, I didn’t not start big, I dreamt big and I’m getting there slowly’.

Our chat with Faraz Manan was simple and honest, he spoke of brands like Chanel and Elie Saab which inspire the ‘timelessness’ in his couture and luxury pret a porter, his eyes lit up when he spoke of the princely states, he spoke of his travels and all he wants to do in this life… For a boy with his eyes firmly set on the stars and more than a few betting that he will get there soon enough, we asked Faraz what he really wanted before he died to which he smiled and said ‘At some point in my life I’ll have a six pack’.

Faraz is all set to show his latest bridal couture collection ‘Lahore’ at the Bridal Couture Week starting tomorrow after a successful showing of Lyallpur a few months back.

The pressure to succeed and the anxiety of failure in today's world can weigh heavily on both our hearts and minds. During such moments, one seeks for soul food. They are gobbets of positivity and motivational incitement to help us...

Mariyam Nafees is a talented actor and a stunning model. She is best known for her role in the hit TV drama serial Diyaar-e-Dil and Kuch Na Kaho. We get talking to the artist in an exclusive one-on-one. Here is...

Khumariyan is the melodious prowess of four musically talented Pashtun boys, who have reclaimed Pehsawar's live music scene with folk music, and have now joined the big league with Coke Studio Season 11.  We love their music and personas...