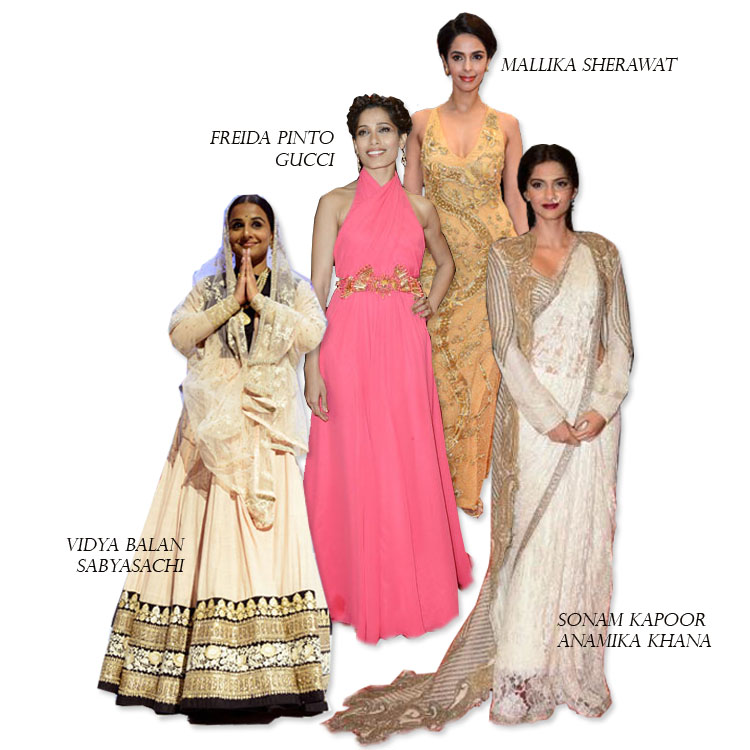 Gone are the days when Ashwariya Rai single handedly wowed the crowds with her mesmerizing eastern beauty. A new brigade of Bollywood Belles is all set to take on the Globe by storm and the Red Carpet at Cannes is a testament of that. This year, four Indian leading ladies graced the carpet on Day 1.
Vidiya Balan joins the Cannes jury panel for the 66th Cannes Film Festival. She wore a Sabiyasachi number which was clearly one of the designer’s less extravagant creations. Why she chose this particular number, we’ll never know. Other judges include renowned names like Nicole Kidman and Steven Spielberg.Freida Pinto, who is now a regular on Hollywood Red Carpet attended the Premiere of Great Gatsby in a Bright Pink Gucci dress. While everyone seems to be raving about her look, honestly I found her make up quite dull and the over all look quite boring and almost predictable. Mallika Sherawat was a total Yawn too… I don’t know what she was doing there to begin with… But then there was Sonam Kapoor, the Loreal Brand Ambassador and by far my favourite Bollywood Fashionista. Not only does she ease into almost any style, the girl has now been turning heads at Cannes for a few years running. Clearly she enjoys fashion and it shows!!
If the online press is anything to go by, once again she’s done it. Dressed in an Anamika Khanna Saree, the actress had everyone’s attention with a big bold ‘Rekha-esque’ nose ring. Show stopping accessories with a shopping stopping outfit. Love it or Hate it Day 1, the Belle of the Ball for her bold style choices was clearly Sonam Kapoor. Keeping a close eye on her in the days to come. Stay tuned!!
Share120Tweet75Share30

Coachella Valley Music and Arts festival 2019 was an absolute joyride to roll with! After two weekends and dozens of sets, Coachella has finally wrapped up for another year. Reflecting the music industry celebrating sounds from around the world,...