As the hall slowly packed at Faletti’s Hotel last weekend, there was anticipation in the air. It has been sometime since even we had been to a solo show and clearly the expectations were high. As the music blared in the hall, Faraz Manan ‘s A list following slowly took seats… The crowd itself was indicative of the kind of interest this show had generated. From leading media personalities, to television and movie stars, to socialites, to the best of the fashion world both old and new all waited in anticipation for the show to start.

Faraz Manan’s focus on his business is evident and the brand clearly enjoys a lot of following. The boy thinks big. You can’t exactly go bigger than Kareena and Karishma I guess 🙂 and that was Lawn.

With Lyallpur, he’s just brought back the solo shows (I strongly suspect we’ll be seeing more designers following suit). One thing is for sure, you don’t go minimalist or understated with a Faraz Manan outfit, he’ll give you bling and expect you to shine that is the Faraz Manan school of thought. Short of PLBW2014, Faraz gives us a lesson in key bridal trends this season.

DON’T BE AFRAID TO EMBRACE YOUR INNER BOLLYWOODISTA:

While the ghararas and shararas will be around as they always are, two of our favourite looks of the show were supremely lehnga choli, bollywood glamour. Faraz clearly wants us to embrace our inner leading lady. 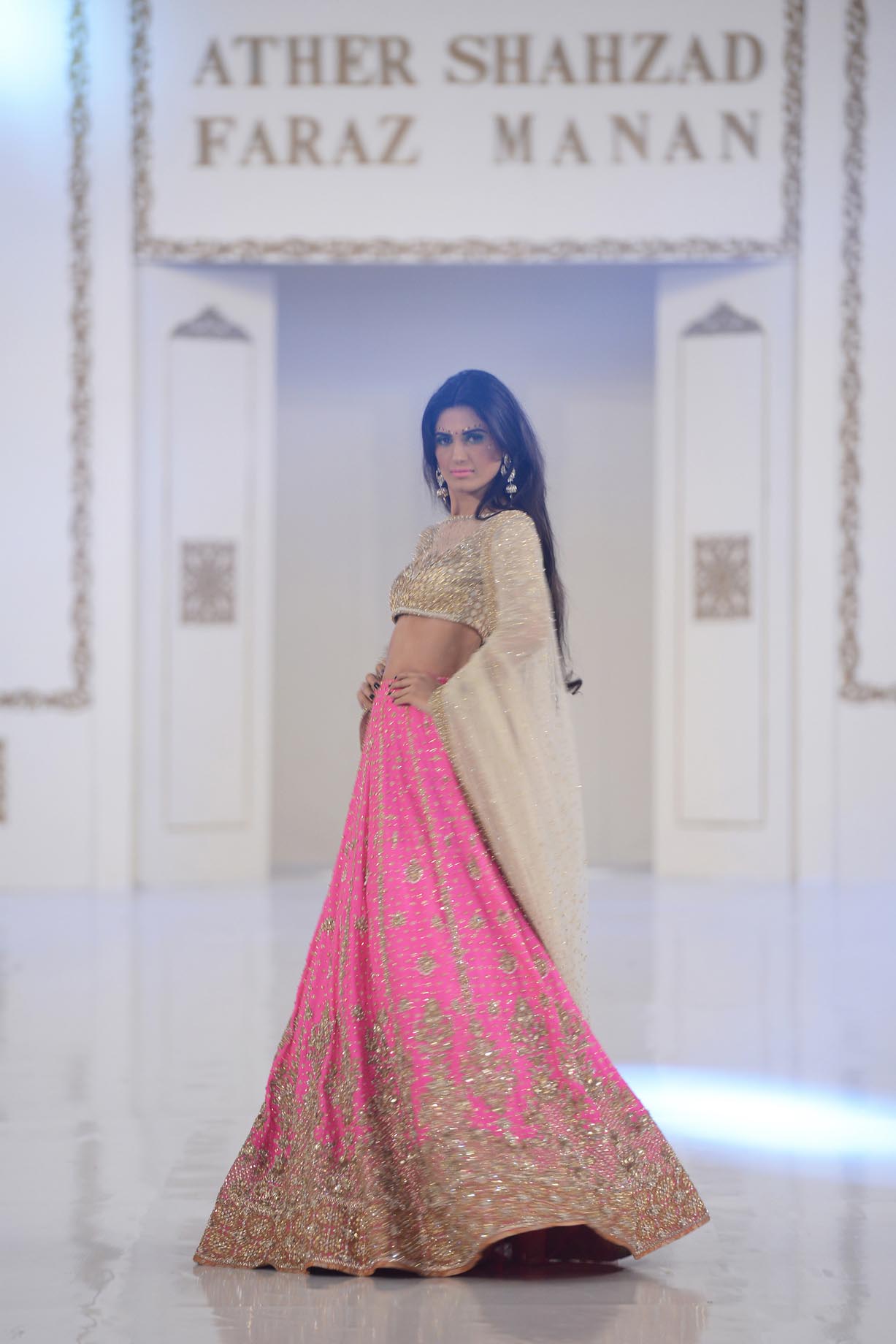 WHEN YOU NEED TO SPARKLE AND SHINE, DO IT LITERALLY:

What would a Lyallpur collection be without it’s fair share of chamak dhamak. Outfit after outfit the ladies walked out sparkling and shining away. Clearly in the world of bridal couture, there is no minimalism. When you need to shine, do it literally! 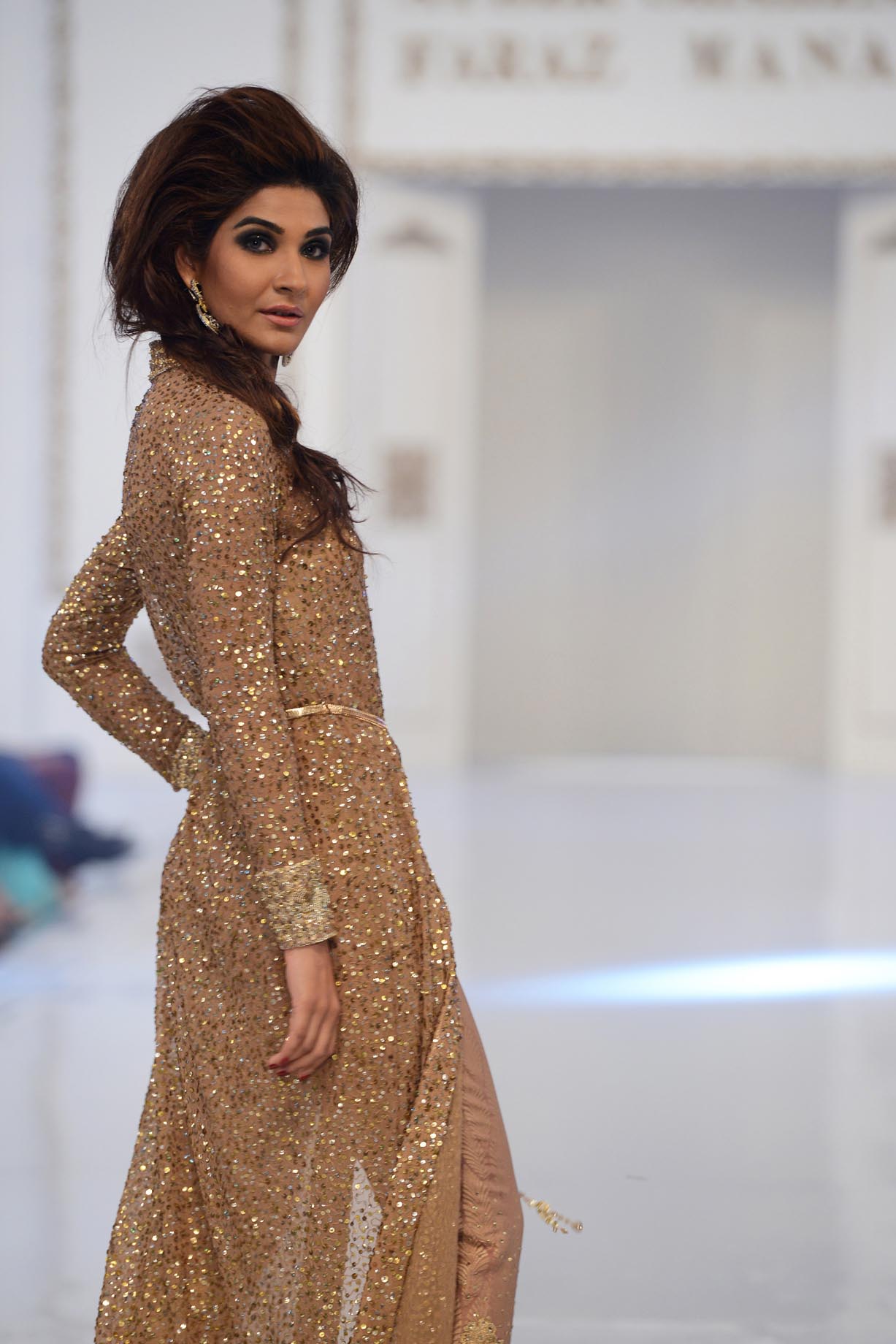 FUSE THE BEST OF EAST AND WEST:

For us personally, it was beautiful to see the range of silhouettes Faraz Manan had experimented with. Not only did he masterfully tackle the usual, there was a range of fusion looks that were nothing short of statements. 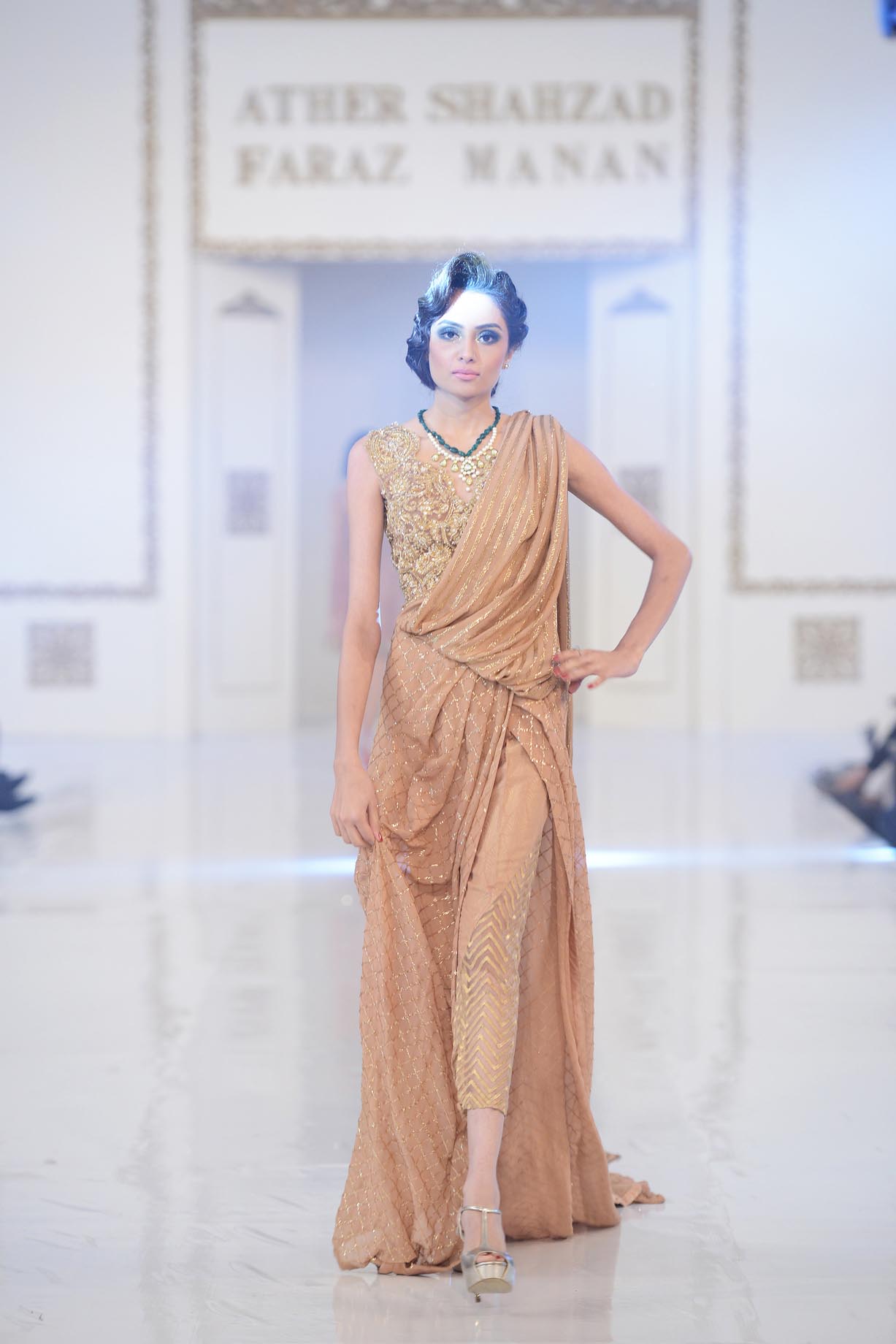 THE LONG AND SHORT OF IT:

The collection had clearly been designed keeping in mind the range of clientele Faraz Manan caters to. As a consequence, there were looks for the young and not so young, the liberal and the conservative, the modern and the traditional… However, the short shirt was the key trend for the wedding season. 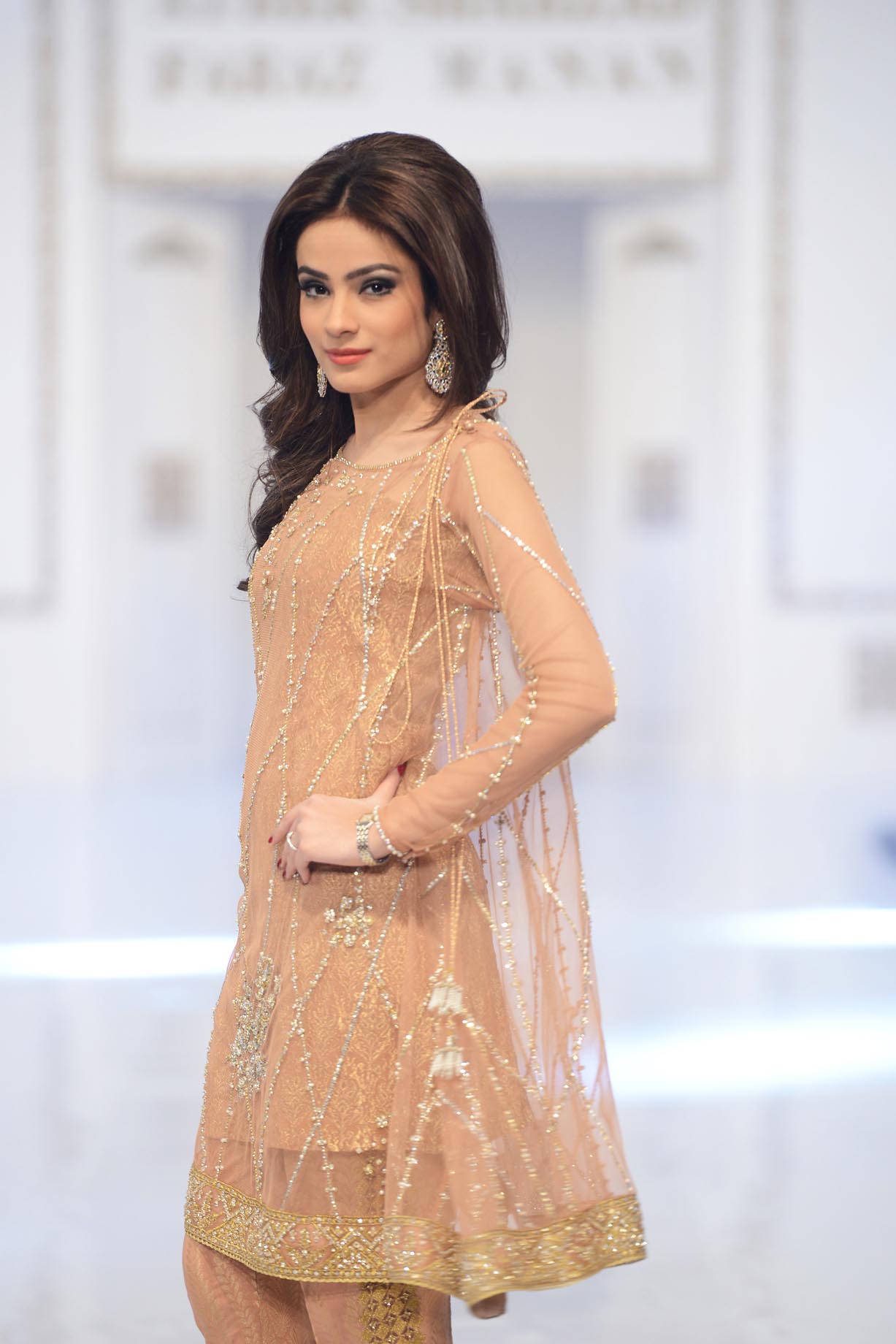 Better hit the gym because winter isn’t giving you respite this time either. Faraz Manan has spoken and it will be cigarette pants this season. Whether your shirts and short or long, this is one standard that’s not changing for now. 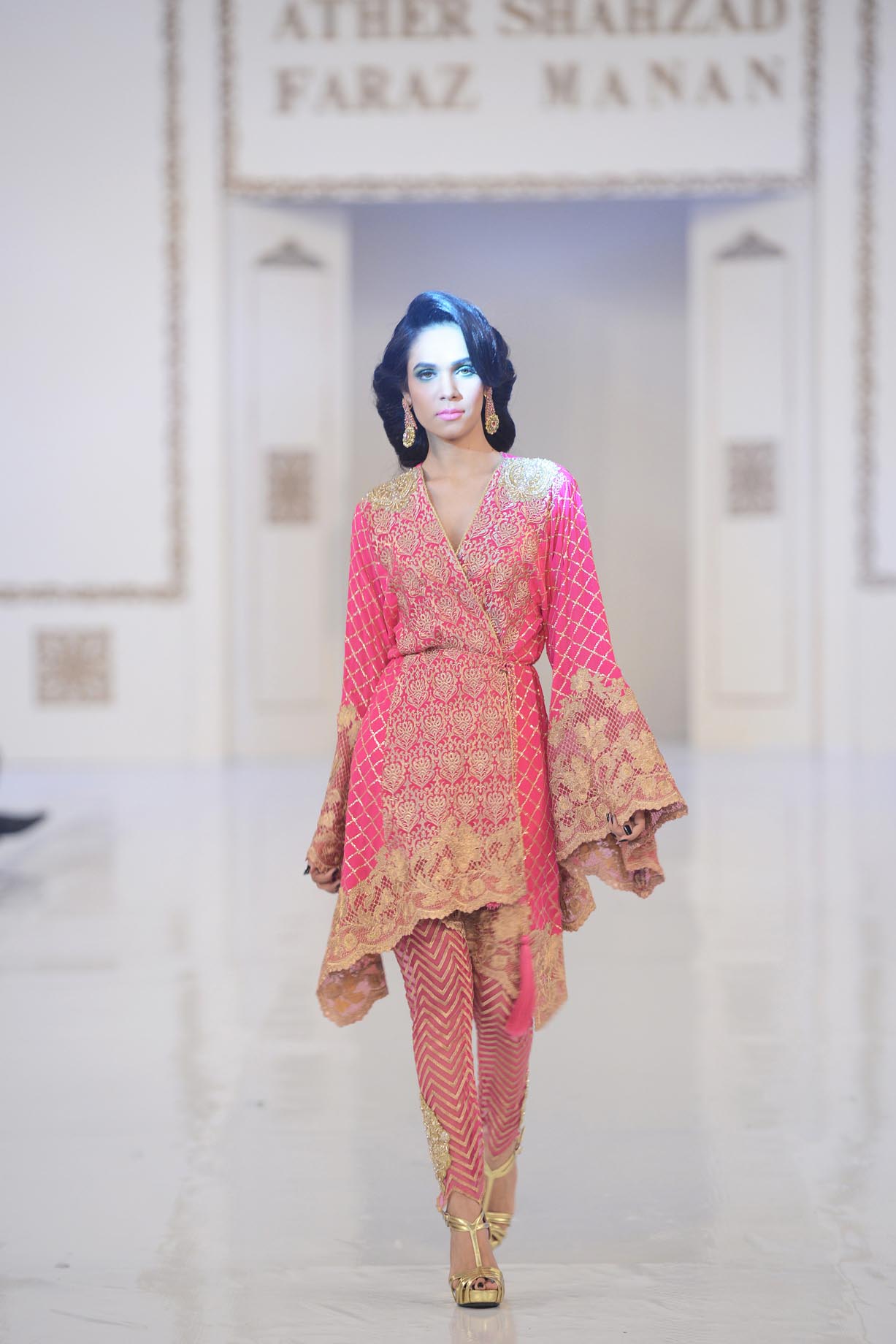 Random Comment: While the Faraz Manan show packed some super oomph, chamak and glamour, I wish generally the models wouldn’t smile at the Frow-ing friends as they walk and presenters don’t thank their uncles and aunties for coming! It just doesn’t work.