‘A shift dress is a garment that features straight lines and doesn’t hug the body’s curves or cinch the waist. Although shift dresses can come in various sleeve lengths and hemlines, the classic shift dress is sleeveless, knee-length, and features a high collar or boat neck. While theshift dress has shown up in fashion periodically throughout the decades, its silhouette is most iconic of the 1960s “mod” look, when it was worn by such public figures as Audrey Hepburn, Mia Farrow, and Twiggy. Some people say that shift dresses flatter any body type, while others argue that their angular cut best suits a thin frame. As shift dresses are characterized by a non-tapered waist…’ 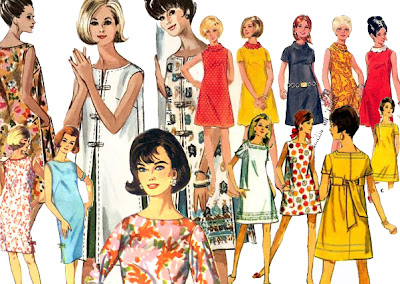 The shift dress can be traced back to the 1920s flapper trends. Dresses of that era, particularly those of Coco Chanel, featured exposed legs and arms, simple cuts, loose shapes and little waist definition. This was a move away from corsets and offered women both style and ease of movement,

According to fashion expert and costume historian Pauline Weston Thomas, the shift dress was derived from the “sack dress” (resembling a food sack) —designed by Hubert Givenchy in Paris —and the fitted sheath dress designs of the 1950s. The shift dress became popular by 1958. Other historians argue that the shift dress was introduced into popular culture by Lilly Pulitzer, who sold the dresses at her lemonade stand. The Lilly Dress was noted for its bright colors and playful fabrics. The dress was then glamorized by First Lady and fashion icon Jackie Kennedy as well as trendsetting actress Audrey Hepburn.

As it turns out, any high street store I have recently visited seems to be flaunting a version of these. From basics like Primark all the way to French Connection, Top Shop, River Island and the works… I am loving it!!
Share120Tweet75Share30