We don’t know about you, but team SiddySays sorely misses Basant.

We’re absolute suckers for festivities and miss the happiness that Basant brought to our beautiful city before coming to a unfortunate screeching halt (in addition to being a great call for tourism and generating livelihood of thousands). We were reminded of the love we had for this beautiful cultural festival when Olomopolo invited us to talk with the team of ‘ Kites Grounded ‘ an independent Pakistani film due to be released soon. 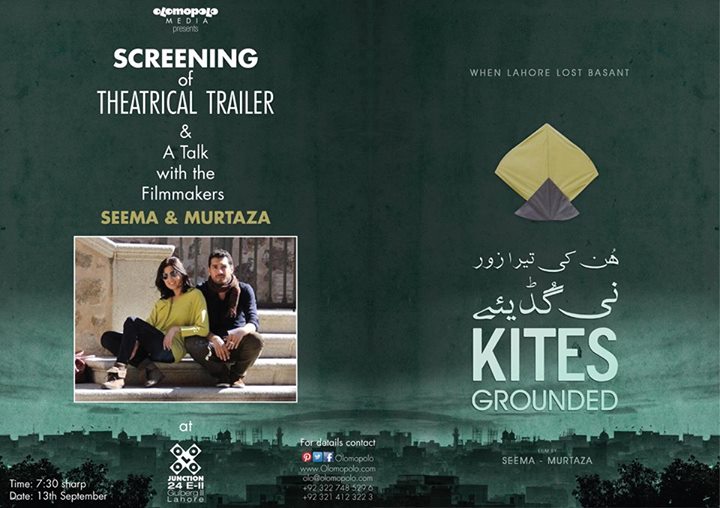 Kites Grounded is a story of a Kite Maker and his dying passion as Lahore faces the ban of Basant. A small gathering of fans and film fanatics gathered as the team passionately spoke about the film. The session included some teasers from the film, the theatrical trailer and Q&A in which the director, Murtaza Ali, the producer Seema Hameed and the lead actor, Irfan Khoosat, who plays the character of a kite maker, took questions about the movie and film making in Pakistan as well as the challenges attached to it.

We’re big fans of Olomopolo already, in case you didn’t know OLOMOPOLO Media is an unprecedented, cultural and social innovation organization that aims to enhance quality entertainment in the society – entertainment with a cause. Our activity center called OLO Junction hosts cultural and art activities weekly. Among these activities there are regular sessions of OLO TATOLO that revolves around interacting with children between ages of 3-13 in arts and crafts, music and storytelling sessions everySunday. Under OLO Junction, we host sessions for theatrical, dance and cultural interactive performances like dramatic readings, film screenings, musical performances, gigs, games nights, social talks, standup comedy acts, open mic nights, reading circles etc.. The OLO Factree is for skill building workshops and classes for performing arts, and the OLO Art Jamaat is the regular fine art, multidisciplinary design, music and dance classes.