Two very different trailers were released this week for two upcoming Bollywood movies featuring Pakistani stars. First, Humaima Malick pairs with Emraan Hashmi in Raja Natwarlal and second, Sonam Kapoor and Fawad Afzal Khan starrer Khoobsurat. Now I won’t get into the details of what I personally think of the movies (ok I can’t stand Emraan Hashmi…. uuurgh!!) BUT, we will have a fashion face off ‘Humaima vs Sonam’ and try seeing which girl makes a stronger fashion statement at the trailer release event.

OVER ALL HEAD TO TOE. 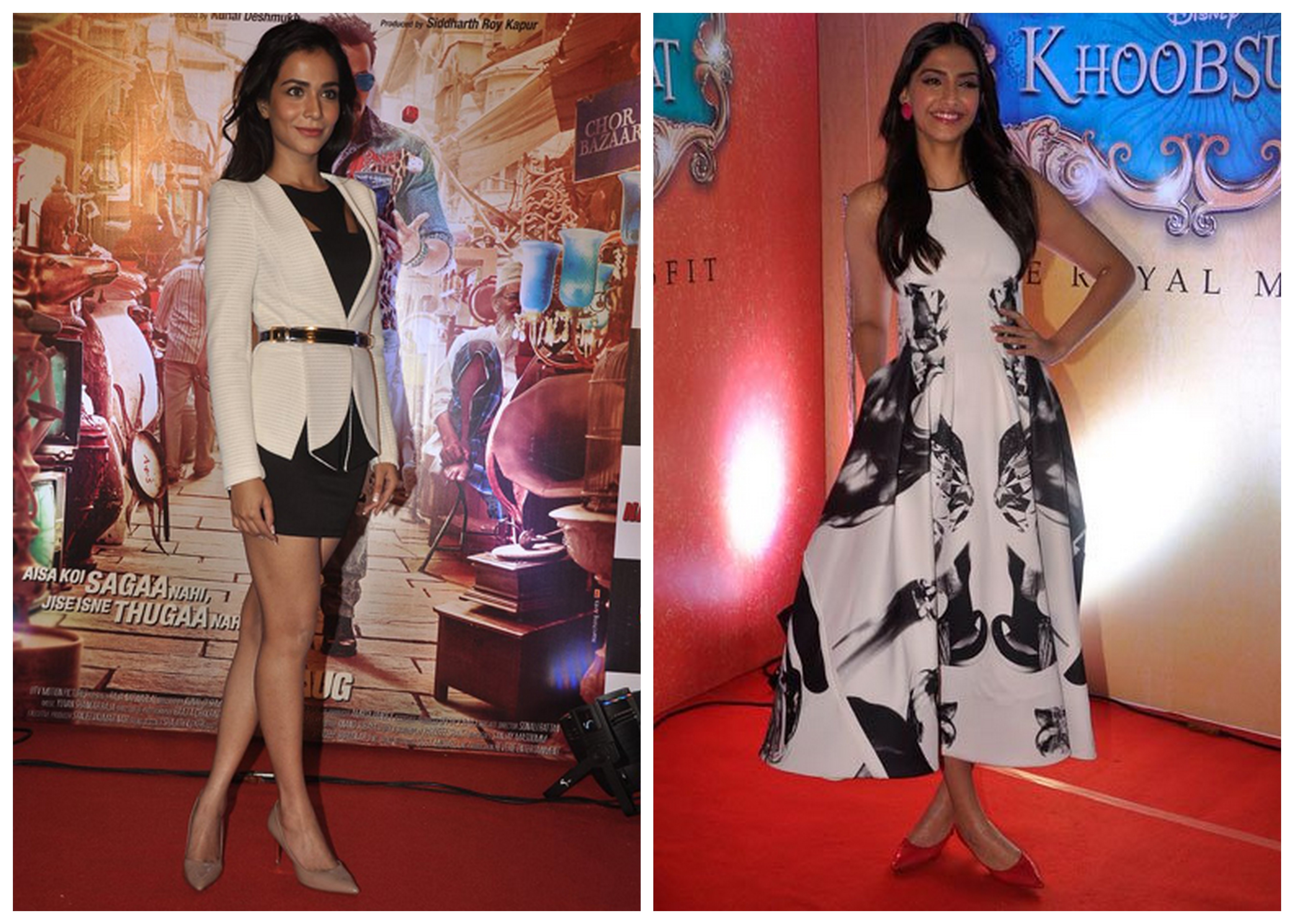 Both Humaima and Sonam chose monochrome looks but they couldn’t have been more different. Humaima’s Bodycon was by an Indian Highstreet Brand Missa More which she paired with a tailored jacket and a gold belt around the waist. Sonam on the other hand chose a flowy gown by  Toni Matesevki an Australian designer. Personally I liked Sonam’s look better but that’s a matter of personal taste. There is no denying that Humaima looked super fit in her look too. Both the ladies seriously disappoint with shoes. I personally love pointy pumps but while I would have liked to see Humaima in something brighter, Sonam’s bright just didn’t do the trick for me. 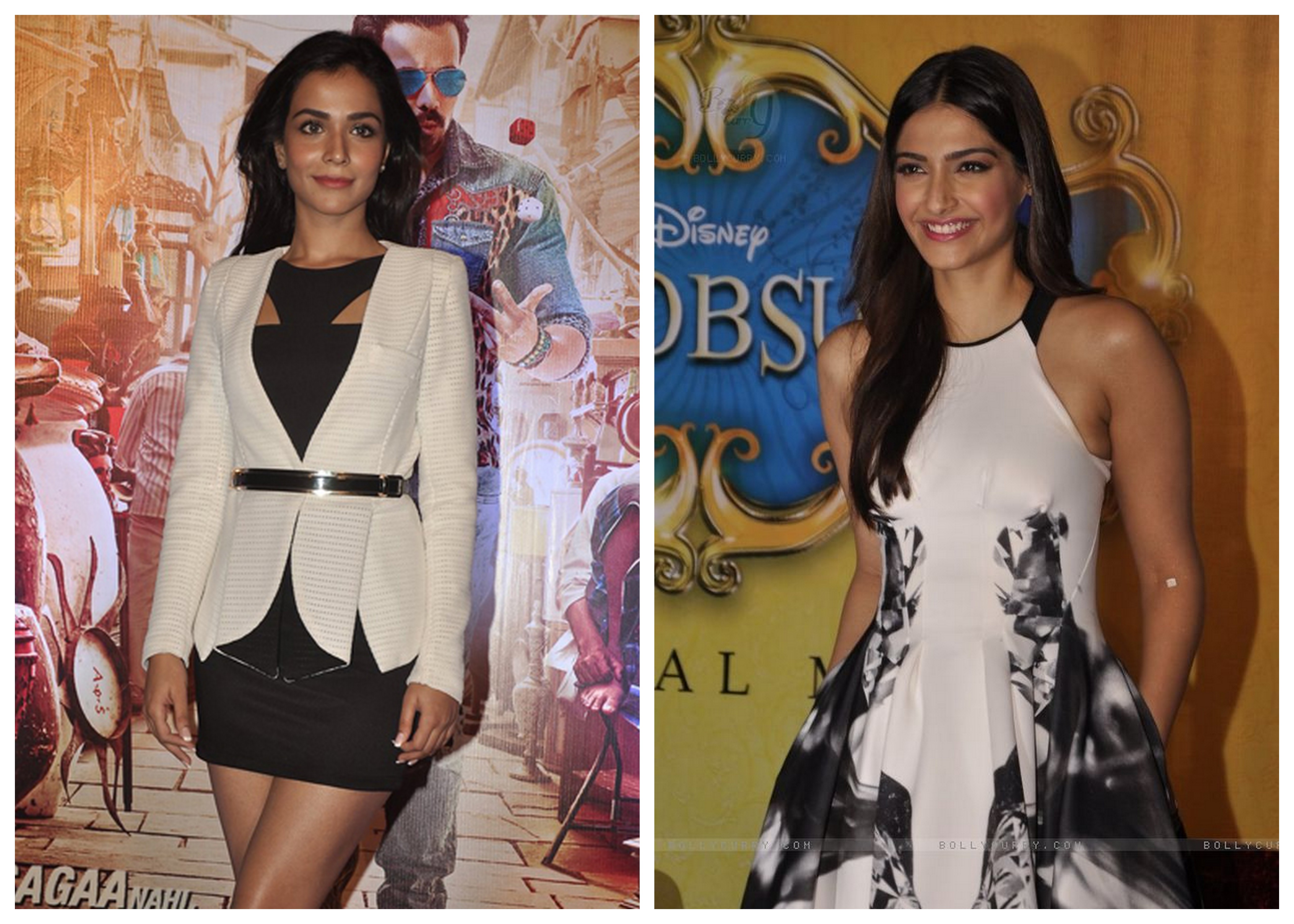 Sonam is more comfortable in her look it seems but the dress does seem easier than Humaima’s bodycon. Plus channelizing the character a bit, Sonam in khoobsurat is happy go lucky while Humaima seems to be the sizzling siren from what I can see in the posters. Sonam’s mismatched earrings (trend alert?!) are not visible her but here one red and one blue earring seem to be creating a bit of dialogue on websites. 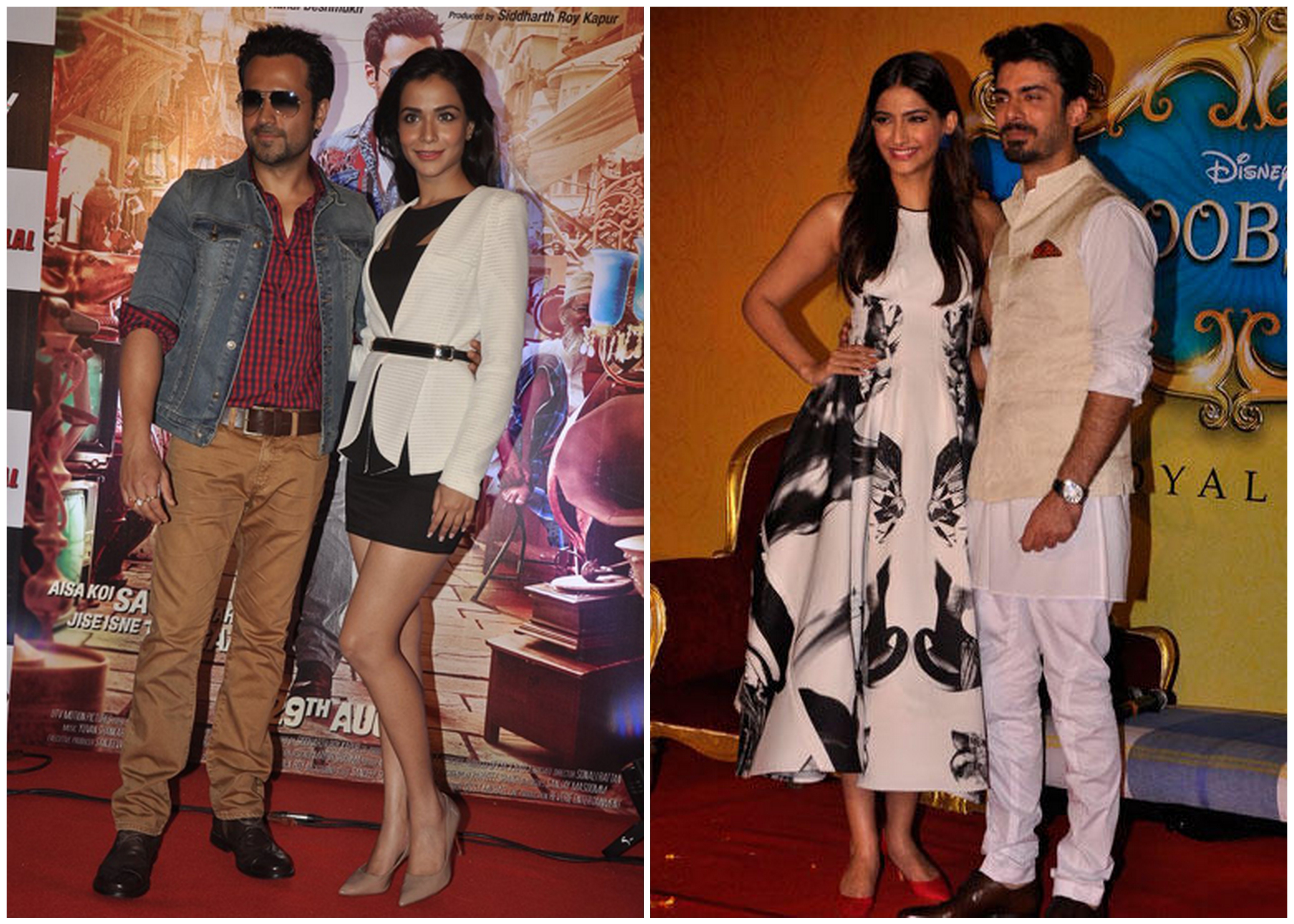 There is absolutely NO question in my mind that Sonam’s arm candy beats Humaima’s arm candy hands down. Call it personal bias or whatever but Fawad just makes my heart melt. I have to say the whole brooding hero business suits him quite a bit. 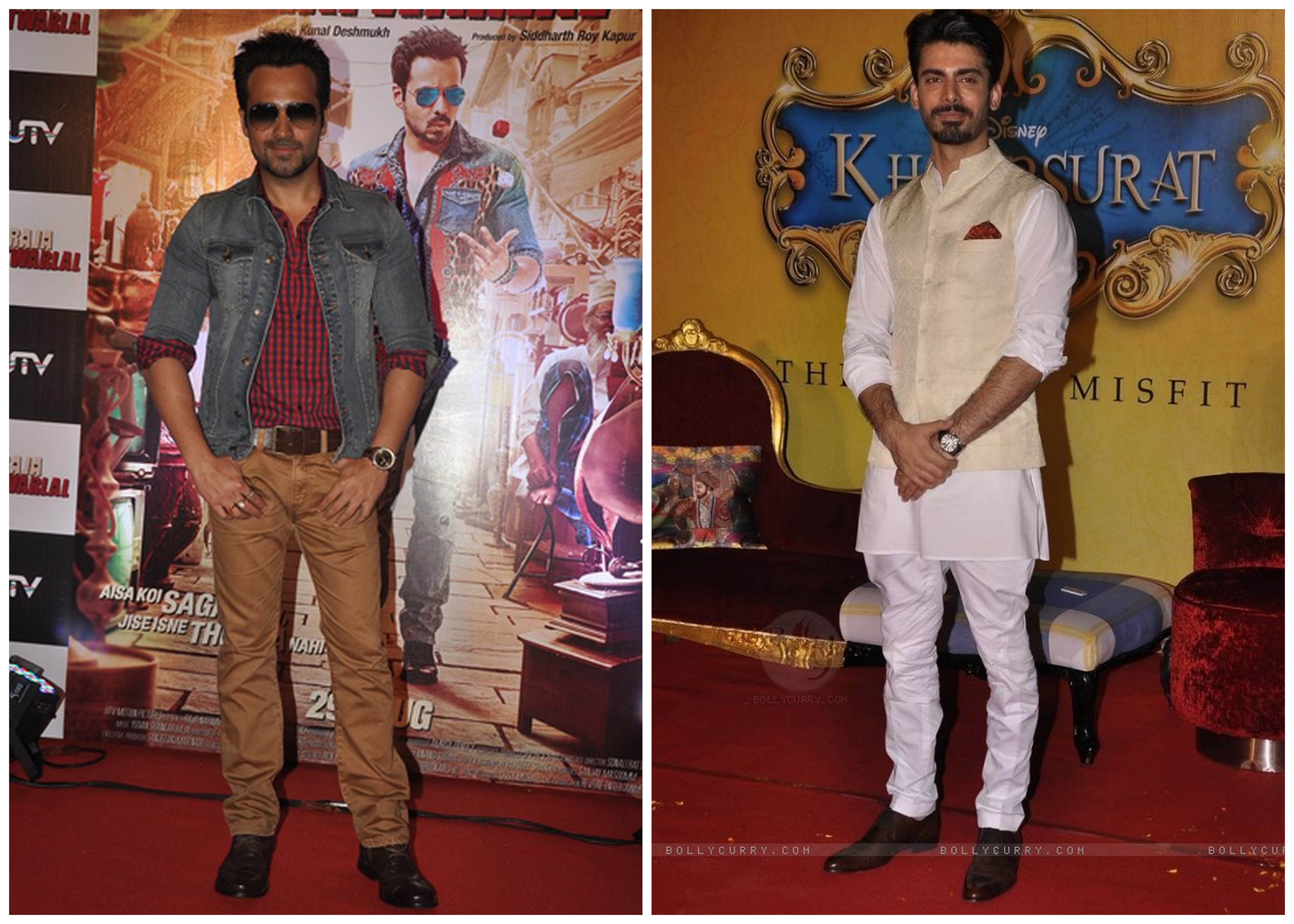 And here is a closer look at the men ummm because I feel like it. Hopefully you’ll be able to understand what I mean even though Fawad’s hair looks a bit huge here. 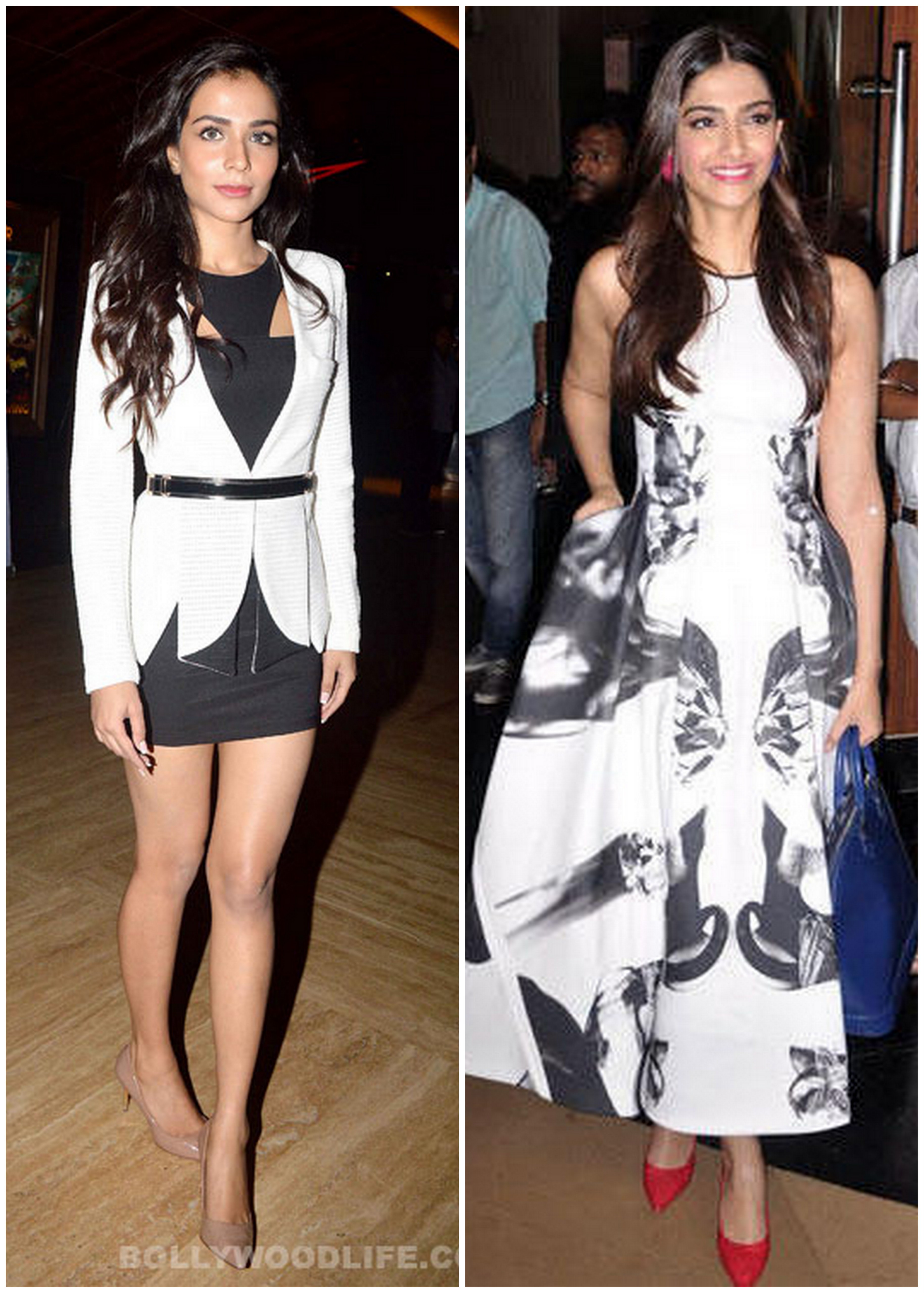 And finally the exit (or entrance) Sonam carries a Louis Vuitton tote matching her ‘other’ earring.

So folks, who wins this one??