We’ve put down 5 upcoming Pakistani dramas for the second quarter of 2022 because we know you also love to watch quality dramas that our entertainment industry has proven to make over the past few years. And not just nationally, but Pakistani dramas have garnered a wide global recognition for delving in encapsulating story lines in spite of the genres.

From new faces to the veterans dazzling us with their magnetic performances and powerful plots, here are 5 upcoming Pakistani dramas 2022.

An exciting ensemble cast stars in Janat Say Agay that’ll be presented to us by the hit duo of Alif, Umera Ahmed and Haseeb Khan.

Gohar Rasheed, Rimsha Khan, Talha Chahour (of Jo Bichar Gaye) and Kubra Khan – we don’t know much about the drama serial as of yet, however Gohar Rasheed has shared his joy on Instagram. Janat Say Agay will air on GEO Entertainment.

We’re looking forward to yet another engaging masterpiece with Janat Say Agay.

Starring the beautiful Maya Ali and the sauve, Bilal Ashraf in a new drama serial called Younhi, which is being produced by Momina Duraid and directed by Mohammed Ehteshamuddin for HUM TV. Both Bilal and Maya have made a hit pair after the two shot for two massive fashion campaigns for HSY and AlKaram. And with Younhi in production, the two actors have been tight-lipped, triggering our curiosity. 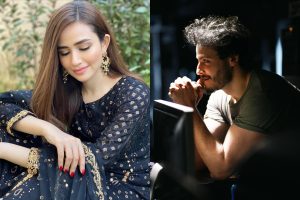 Penned by Suno Chanda, Hum Tum, Chupke Chupke and Ishaq Jalebi fame, Saima Akram Chaudhry, Kala Dooriya is releasing sometime in September and the teasers are already out. Starring Osman Khalid Butt (hopefully)  with Sana Javed and a star studded cast with Nadia Afghan, Ali Safina and others, since Saima is known to write fun and easy to watch family drama’s, we wonder what Kala Dooriya would be about.

Ps. The teaser is out now!

So excited to watch Iqra Aziz reunite with Imran Ashraf from their acclaimed drama, Ranjha Ranjha Kardi and Feroze Khan for their performances in Khuda or Mohabbat 3. Sanwal Yar Piya is written by Hashim Nadeem and this Wajahat Rauf directorial will be produced by Shazia Wajahat.

The drama serial is being highly anticipated for it’s star-studded cast and we’re as eager as you are to watch these exceptionally talented actors unravel their magic on screen.

Yasir Hussain will be directing and acting in Ek Thi Laila opposite his wife, Iqra Aziz in this mystery serial about a girl who goes missing and instead of catching the culprit behind her disappearance, many including her ex-fiancé and the police begin to character assassinate her by accusing her of eloping. The same people become suspects in the case of her disappearance.

The story goes on to unravel what really happened to Laila, and how she had to go through a long route of betrayals. The drama will highlight how it is easier for society to point fingers at women as opposed to providing them safety. For it is only after Laila is recovered, that she shames the suspects turning a blind eye to their own faults.

Ek Thi Laila is going to be an emotional roller coaster.