ALIF EP#15 IS ABOUT HEARTBREAK & THE TRUTH

Different and thought provoking in every sense of the word, Alif is a drama which besides being a treat, it is also a very heart warming tale that makes you want to re-evaluate your priorities in life and question/find a connection with the Almightly Allah.
.
Written by Umera Ahmed and directed by Haseeb Hassan, even though last night’s episode was deeply touching, it was however, a tad bit slow. We finally know now why Ahsan Khan aka Taha left and the way he expressed his inner turmoil was fabulous. Kubra Khan might have disappointed us a little because the scene between Husn-e-Jahan and Taha should have been a turning point in the episode, but with Kubra’s low on energy and dull expressions when Taha tells her that he can no longer paint Allah’s name, should have given us the goose bumps.
.
With Kubra Khan being the weakest link in Alif, the stars besides Ahsan Khan, Hamza Ali Abbasi, Sajal Aly and Saleem Mairaj deliver powerful performances one after another.
.
Here’s what we thought about the episode in case you missed it.
.

Now one of the top stars one would assume she would feel slightly content, but her family problems sadly are not going away as she discovers her mother has schizophrenia and she has to keep it a secret from her father. Truly a heart-breaking moment though, it seems that happiness is an emotion that Momina will not be feeling any time soon, especially after knowing how her parents are unhappy with their new conditions and living setup.

QALB-E-MOMIN MEETS HIS OLD SELF

From episode 1-15, we’ve seen Momin go through a transformation in his personality courtesy his dada. And the interview that he saw on TV where Momina expresses her anger and disdain towards him without naming him, is a reality check for him and the ruthlessness he showed towards Momina when she came to give an audition. The fact that a new path has been carved for Qalb-e-Momin is what we can’t wait to see.

One of the highlights of the episode was this turning moment where she is seen reading the story penned down by the man she hates and is seen quite engrossed in it. Having promised herself not to work in it we have a feeling that she will and how will these two characters come together is what we look forward to discovering soon.

.
Over all, brilliant acting by Hamza and Sajal, these two stars were the perfect actors to play such roles as they themselves believe in their characters which makes them come to life and touch you emotionally every week.
.

A powerful episode is expected next week where Momina will tell her father about the script as she realizes that it is a true story and her father is also involved in it.

ALIF EP#6 IS ABOUT THE PAST, EMOTIONAL TURMOIL & REVENGE 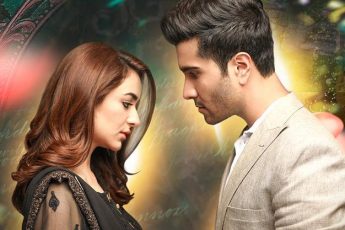