ALIF EP#6 IS ABOUT THE PAST, EMOTIONAL TURMOIL & REVENGE

Umera Ahmed’s pens down characters that maybe distraught, broken and carry a lot of emotional baggage, however they are strong and always emerge victorious, and that is exactly what we can say about all the characters we’ve met in Alif so far.

Momin may seem arrogant and hard hearted, but deep inside he is vulnerable and emotional. Momina who has a struggling gait, is hopeless and upset, but she is strong willed and supports her family despite all odds. Their lives are intertwined in a way that will open a new world for both these characters.

Alif, episode 6 took us on an emotional journey yet again that will soon become life altering for both Momin and Momina.

Episode 5 had hinted us that Momin would get back to Neha for forcing him to cast Zulfi as the lead in his new film, however that did not go down well with him, so he took revenge on her like a jilted lover by publicly humiliating both of them by getting Sofia, Shelly and Abbas on board. And later when Neha confronts Momin at his house, she vows for payback. And in that very moment we had a feeling that things would go down hill for Momin. During a meeting with the Shelly, Dawood and the writer of the film, Momin disregards the script and gets irked by Husn-e-Jahan’s mention since the writer had written the plot of Momin’s new movie keeping her in mind. And Shelly’s insistence on finding out who she is, fires back. Momin takes a private moment where he reminisces about that moment with his mother, Husn-e-Jahan when she had decided to leave him. To add fuel to fire, Neha leaks private pictures of Momin when he is on his way to the airport to visit his dada in Turkey. Moreover, Momin also fires the writer, so the drama has slowly started to unravel in Momin’s life.

It’s been days since Jahangir’s passing, however Momina and her family continue to grieve in their own way. Her parents are inconsolable though. Worse, they are in debt therefore even though Momina hates the current profession she is in, she has to continue being a part of it to support her parents. Since the beginning of Alif, Momina has been shown as someone who struggles with her identity and her faith, she is lost, but her relationship with Master Ibrahim is what brings some sort of sense and semblance to whatever she feels. Their exchanges on life, faith and the Almighty are beautiful lessons that teach us about punishment and reward, good and bad, hope and despair.

Even though Husn-e-Jahan comes and goes in memories and flashes, but she has made her presence known with her screen timing and kudos to Kubra Khan for so wonderfully portraying her character. She is an abandoned lover, a mother, she’s depressed, she hates the fact that she has live a life of that of a dancer, and she emotes all that and much more, and takes you all in with her.

Momin is off to Turkey because even though he doesn’t want to admit it, but his dada’s persistence and sudden disappearance has triggered something in him and we’re going to more of what ensues as he questions everything. Faisal is back in the limelight and we’re going to see how that will affect Momina. 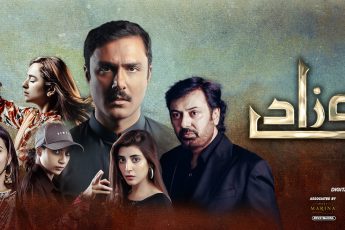 LUX GIRLS OVER THE YEARS