We honestly don’t know how you’re going to feel about this once you start scrolling, because Can and Cengiz look so alike, and although we (kinda) know that we’ll be biased when it comes to a face off between Can Yaman and Cengiz Coskun, but here’s what we think.

Can Yaman has been on a zing since the hit release Erkenci Kus, the guy was a star over night for his looks especially and his chemistry with the ravishing Demet Ozdemir.

Cengiz Coskun has been eyed for his role in Dirilis Ertugrul this Ramzan.

But, God, I have to admit that Turkish men have a way about them, they way they look, talk and present themselves would make any girl swoon. But we will keep shaytaan at bay because its Ramzan (Oh! Allah please forgive me, but he heart wants what it wants, right?)

Also, what’s up with the brooding? SERIOUSLY!

Both Turks are EQUALLY good looking, I mean, look that them? Cengiz has this rawness about him, and Can, well he does too. Ok, this is a fail. Next! 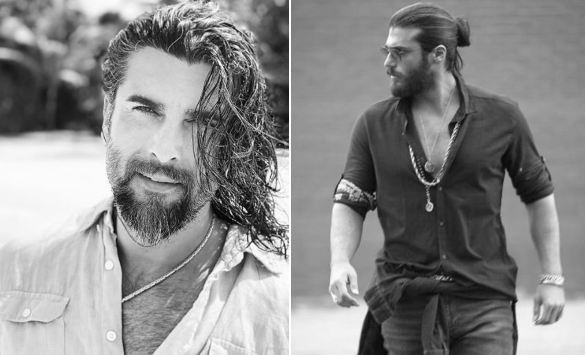 But in all honestly, those locks, that beard, the side pose – how alike are these two?!

Turkish men surely know how to carry themselves. They make fashion like they were made for it and that is exactly what Can and Cengiz do here, JUSTICE to how handsome they look.

This snap roll would have been incomplete without seeing these two dishy men in a suit and, hello? I can’t seem to get over their similarities.

Tall, bearded, long hair, a damn good well built, clearly Turks know how to get their audiences rolling even if it’s for a role.