Dil-e-Momin ep 2 began with Momin visiting Ashi’s place to apologize to her parents about not spending time with them when they came home. While seeing off Momin, Ashi tells him to stay away from his students and colleagues. He playfully tells her to come along with him and protect him from all girls. 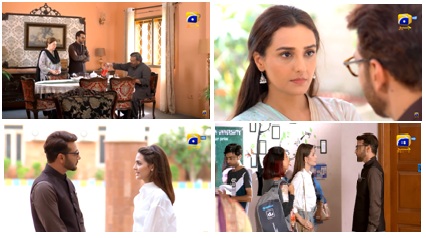 Maya arrives for class well before time. She wants to get Momin’s praise for it but he dismisses her by saying that coming to college on time isn’t something to be praised about. Maya unable to control herself, invites Momin for a welcome party. She says it is a tradition for students to throw a party for a new professor. Momin reluctantly accepts the invitation.

Gohar learns of the party and is livid because of the importance Maya is giving to Momin. To put an end to Gohar’s questions, Maya tells him that she likes Momin.

Momin learns that there is no such tradition to welcome a new professor and understands that Maya lied to him. Gohar confronts him and tells him everything. Momin doesn’t go to the party and tells Maya to never call him again. Maya apologizes to Momin for lying to him and presents him with a sketch she made in his class. Just before leaving, she confesses her likeness towards Momin.

To find out what happens next, keep watching Dil-e-Momin on Fridays and Saturdays at 8 pm on Geo TV and watch this space for more reviews. You can read the review of Dil-e-Momin ep 1 here