Gohar ends up at Momin’s place 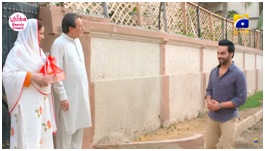 To find out the truth about Momin, Gohar arrives at Momin’s place only to learn that Momin’s marriage is getting fixed to a girl of his choice.

Momin’s parents are met with disappointment

Ashi’s father, Jameel, refuses to marry her to Momin. Ashi’s mother and Momin’s parents are shocked and surprised at the same time. Jameel tells them he will get Ashi married to his brother’s son.

Momin’s family breaks the news to him but he refuses to believe it, thinking they are pulling a prank on him. Judging by their faces, the reality sinks in and he is devastated.

Momin shows up at Jameel’s place to get answers

Ashi refuses to marry anyone else except Momin. Just then, Momin arrives to talk to Jameel who insults him and throws him out of the house. He doesn’t listen to any of Momin’s or Ashi’s pleas or that of her mother’s.

Maya finds out about Momin’s marriage

Gohar tells Maya that Momin is getting married to a girl of his choice but she thinks he is just doing it out of spite.

Momin’s father talks to the mosque’s imaamabout Momin’s predicament and how his uncle is creating problems in the marriage. He asks him to pray for Momin and to bring ease in his difficulties.

Momin’s family is worried for him

Momin’s mother and sisters are worried for him. They are so sad they even refuse to have dinner without him.

Momin and Ashi finally talk to each other

Momin’s sister, Fari, talks to Momin about how Ashi is worried for him because his phone was switched off for the entire day. Momin calls Ashi and tells her to not rebel against her father because it will only make matters worse.

Will Jameel agree to marry Ashi to Momin? What will Ashi and Momin do if he doesn’t? What will Maya do now that she knows about Momin’s marriage? To find out, watch this space for more reviews. Dil-e-Momin airs on Fridays and Saturdays at 8 pm on Geo TV.