DOBARA EP 6: IT IS NOW MEHRUNISSA VS HER FAMILY

Dobara is shaping up to be one of the most loved shows on television right now. Everything from the performances to the story is getting a lot of appreciation. Audiences wait eagerly for every episode which is enough proof of the show’s popularity.

In the latest episode, we see Mahir adjusting to his life at his friend’s place. He is made to do household chores and contribute in the rent, something he hasn’t done and is unable to do so because of his financial problems.

Seher and her mother’s deceitful nature

After she returns from shopping, Seher tells her mother how Mehrunnisa bought bright clothes for herself. Her mother doesn’t leave that opportunity to comment about Mehrunnisa’s character. She tells Seher this is the time to buy expensive stuff to accumulate a lot of wealth from Affan’s family.

Mahir finally gets a job 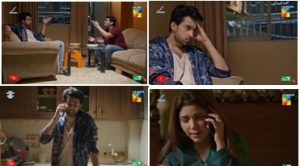 Mahir realizes he can’t live in his friend’s place for long where he doesn’t even get enough food to eat. He calls Mehrunnisa and asks her for a job. She tells him she would find him one soon.

Mehrunnisa hired him to teach her how to play tennis. She ends up giving him an advance payment of 25k in order to help him out with his troubles.

Mahir shows up at Mehrunnisa’s house

On Mehrunnisa’s invitation, Mahir comes to her house for her son’s engagement. He tells her she looks beautiful which brings a smile to her face because her family didn’t approve of her dressing and made her aware of that. Mahir’s compliments bring a smile to her face. She dances with him which also irks her family.

Mehrunnisa has a big fight with her son

Affan fights with her mother about her clothes, her dancing and her friendship with Mahir. The episode ends with Mehrunnisa telling them she will do as she pleases and if anyone has any problems, they can leave.

Talking about the acting, everyone remains at the top of their game. Bilal Abbas Khan is the star performer without any doubts. Sabeena as Seher is also great as the dumb, bimbo who dances to her mother’s tunes and does as she is told.

What will happen in the next episode? Will the problems be resolved or get worse between Mehrunnisa and her family? To find out, keep watching Dobara on Wednesdays at 8 pm on Hum TV.