A project by Sadia Jabbar Productions, the drama serial ‘Mujhay Beta Chahiye’, as the title suggests, highlights the issue of gender discrimination currently prevalent in our society. Starring veteran actors including Shagufta Ejaz, Sabreen Hisbani, Shahood Alvi and Aiza Awan in pivotal roles, Mujhe Beta Chahiye portrays the mindset of some people in our society who consider the birth of a baby boy as an honour, while consider that for a girl to be a matter of disgrace.

So far, in ‘Mujhay Beta Chahiye’ we have seen that Salman and Rubina are a happily married couple with two daughters, and they are expecting their third child. Their doctor tells them that it will be a son this time, according to the ultrasound reports. Salman’s happiness knows no bounds after hearing the news.

However, when the child is born, they find out that it’s a girl again and that is where the troubles begin. Salman is not just depressed, he is enraged since his dream of becoming the father of a son is shattered. He wanted a son at all costs since he thought he will finally get a male successor to continue his lineage, but that does not happen. In such a scenario, Shareefan and Jahan Ara, his family relatives, take full advantage of the situation and further make him realize his ‘bad’ luck and what he was missing out on, with the absence of a son.

The story will progress further from here and let’s see how the writers will now highlight the matter of gender discrimination that still exists in our society.

‘Mujhay Beta Chahiye’ no doubt touches a bitter reality of our nation, where the desire for a male child is common and continues to exist.

She pointed out that this unreasonable desire is for a number of reasons that include the longing for an heir, for a family line or family name successor, and sometimes for getting a stronger social standing and acceptance. She also talks about how we consider the expenses on a daughter as expenditure and that on a son as an investment. In her talk. Sidra Iqbal highlights how when a woman gives birth to a boy, she feels that her relationship with her husband has become stronger and she has secured her place in her susraal.

‘Mujhe Beta Chahiye’ also touches upon all these aspects in a convincing manner and gives us a clear visual of a mindset that is repressive and degenerative to say the least.

What we wonder now is how the story will further progress. Fact of the matter is, we as a society have failed time and again when it comes to gender discrimination. We go to schools and get an education, we work equally with the opposite gender, we see females progressing in all fields of work, yet we are biased towards the male gender when it comes to our offspring. We sincerely hope the show progresses to show some dire consequences to this unreasonable prejudice and gives off a strong message of equality and acceptability to the masses.

YEH DIL MERA: SAJAL ALY IS WORTHY OF AN OSCAR 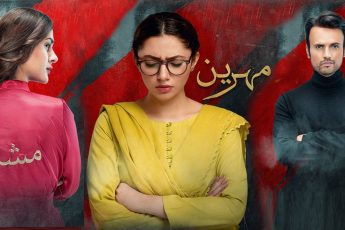