EP# 1 OF ALIF IS NOSTALGIC BUT MAGNIFICENT

Last night I was transported to a world reeling with intensity, emotions and nostalgia because the first episode of the most awaited drama serial of the year, Alif gripped me from the beginning towards the end in anticipation of what was going to happen next. Episode 1 had several aspects that were shown in the form of hope in a young boy, desperation of a girl in need, loss of a woman in love, and a man with no face, but a disguise for the world to see. Moreover, the vibe of the episode has set the mood and tone of the drama, thoughtful and reminiscent for the integral characters in a parallel universe.

The character detailing was perfect to the T and I instantly connected with their stories and could relate to what they were feeling from the beginning.

Young Momin (Pehlaaj Hassan) is shown as a sweet, loving and thoughtful boy who is observant of his mother’s longing and pain due to his father’s absence. In the opening scene we see him writing a letter to Allah seeking answers from the omnipotent. For a boy who is well aware of the emotional dilemma that his mother goes through at nights when he hears her crying, or the fact that she writes unsent letters to the love of her life, and yet be wise beyond his years to understand with sensitivity his mothers role as a broken woman has been beautifully portrayed. Clearly Momin is very attached to his mother while growing up and therefore he tries his best to keep her happy and shares a strong equation with his mother.

Hamza Ali Abbasi plays Qalb-e-Momin, who is a bold, aggressive and remorseless man. He has worked long and hard to become one of the top Film Directors in the country and has a slew of girls who are trying to impress him to ace the leading ladies role in one of his films. Momin is happy to oblige a girl who is ready to pay the price and appeal to his philanderer side. Momin leads a superficial life and we will see later why and what brought this drastic change in his life.

Sajal Aly plays Momina Sultan. A girl who is struggling to provide for her family and seek treatment for ailing brother through substantial work in the industry. Being an actress is not her priority, however having a father who had worked as a makeup artist in the film industry. Momina is left with no choice but to look for work that would pay her bills, and through all this we see her efforts, misery and hopelessness because she is a tormented soul. Her inner monologue is so beautifully scripted and Sajal presents the perfect picture of a girl who is lost, but she is also trying her best to manage her personal financial affairs.

Husn-e-Jahan is shown as a revered yester year actress of the industry and people loved her. We hear her reference a few times from Momina’s father and Qalb-e-Momin. For Momina, she is a symbol of talent and beauty, and for Momin she is his mother (Kubra Khan) and has some strong but painful memories attached to it. So Husn-e-Jahan’s character will unfold as we go along Alif’s journey.

Momina’s family, Lubna Aslam, Saleem Mairaj and Hadi Bin Arshad will be repeating characters since Momina will be seen working towards getting her brother his treatment.

Yashma Gill is shown as a leading actress who has worked with Momin in a hit film and from her brief role we could see that she is one of the girls who fits the type of actress Momin likes to work with. Sadaf Kanwal is shown as Momin’s love interest and he proposes to her with a ring refers to her beauty as Husn-e-Jahan’s, but not exactly Husn-e-Jahan herself.

Hamza Ali Abbasi was convincing, Sajal Aly was fabulous but it was Kubra Khan who surprised us with her emotional view of a heart broken woman. And we’re looking forward to episode 2.

ABDULLAH QURESHI: KITNI DAIR IS A PRAISE TO THE ALMIGHTY'S KINDNESS 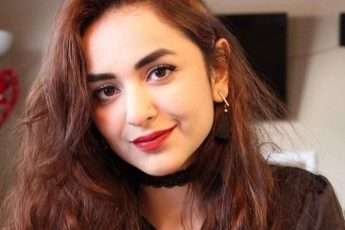