Game Of Thrones, season 8, episode 3: ‘The Battle Of Winterfell’ is indeed the grandest affair to ever grace our TV screens. Based on an epic fantasy that’s full of legendary heroes and fanatic foes, magical swords and fierce armies of the living dead, GoT has always been a ride that’s indeed full of anticipation and apprehension alike. But nothing, ever, in the history of mankind, has allowed us to experience this intense feeling of reeling emotion that The Battle Of Winterfell did. 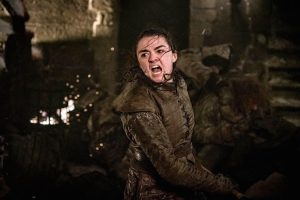 Out of all the wondrous, disastrous scenes that left us thoroughly shaken, I sincerely doubt if I’ll ever experience another glorious moment like the one where Arya was seen leaping through the dark, as quiet as death, her dagger unsheathed (that same Valyrian steel dagger that was used to assassinate Bran all those years ago by Littlefinger) and her stance immaculate, poised to attack. The Night King senses her presence though, albeit a little late, but acts in time and grabs her by the throat, attempting to squeeze the life out of this little warrior whom we have witnessed evolve remarkably through the previous seasons. Arya drops the dagger; all hope is lost. She catches it with her other hand; plunges it into The Night King. He drops to the ground, shattering into a million pieces and with him (the creator of the living dead), falls to the ground and perishes his army of the countless dead.

In all honesty, this particular episode deserves a second viewing to fully wrap our heads around all that transpired, and, also, to fully appreciate how it does. So I did. And things made better sense this time when Melisandre asks Arya:

“What do we say to the God of Death?”

“Not today,” Arya answers, and rushes off.

And now I chastise myself for missing the obvious, yet remarkably well-concealed hints that were there all along: Melisandre’s appearance at the Battle of Winterfell serving as a callback to her prophecy known as the “Prince That Was Promised” prophecy. 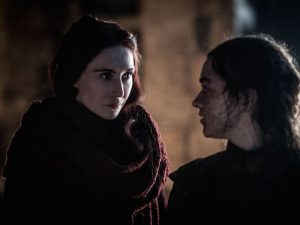 Melisandre’s prediction that foretold the rise of one true savior who now seems to be Arya Stark, was about Azor Ahai: a saviour, who will be the reincarnated hero known as Azor Ahai. The one who will save the living from the Long Night, with its terrors imposes by the Night King and his unstoppable forces.

The night is always darkest before the dawn.

This episode for sure had us grasping at the edge of our seats. And while many criticise the episode for being anti-climatic, a true GoT fan would understand the way things came back full circle. All seven seasons were tied in beautifully in one long episode. We were especially delighted that the focus shifted away from Danny and Jon. Mostly because true to the GoT aesthetic, there will never be one hero. Case in point the beheading of Ned Stark in season 1 followed by the death of Rob. George R R Martin has imagined a universe that is meant to use characters within their own agency. No one is the hero and no one is per say the villain. Every one is fighting to survive! This episode was a true testament to that logic. Which is why, we simply loved it!