The 7th Hum Awards 2019 put on a big show on an other continent with our celebrities flying around the world posting and updating us on social media to gear up for what would be a glamorous show while we sat on the other side eager to get updates in anticipation.

However, as soon as the red carpet was rolled out, our excitement fizzled to flat because of the yaay and naay fashion choices of our celebrities.

So, here are the top “mehh” looks from the 7th Hum Awards 2019 with a recap of the looks of the same celebs from past award shows.

Kubra’s look was extremely underwhelming, and even the knotted-dangly earrings didn’t do much to lift her look up.

At past award shows we’ve seen her clad in a white-ghost sari and then she moved on to a “shaadi wala jora” for one of her looks at the Hum Awards.

In all honesty, Kubra needs a good image consultant/stylist who will take the years off of her.

We dislike Urwa’s wedding look at the #KashmirHumAwards2019, and let’s not even talk about Farhan’s sherwani. But honestly, Urwa’s choice does not come as a surprise because if you look at some of her style choices in the past, from the white MNR cold shoulder dress and Tabassum Moghal’s outfit, they are tasteless. And this year, her “sheeshay ke kaam wala frock” has disappointed us even more.

Mawra’s choice of outfit seemed like last minute maybe? And we wish she had done better with her hairstyle, which added years on her sweet face. If you look closely, in the past Mawra has looked great and then safe (or just boring). However, the Manish Malhotra outfit in Toronto was well thought out, but the pastel pink cinderella look at another award ceremony was trying too hard. Alas!

It’s clear that Iqra is fond of wearing the a-symmetircal off shoulder style and has carried it out pretty well in the past few years on the black and white gown at two different award shows, but what was she thinking with that colour, over done with a frill, extra beading from her shoulder to the grown, and oh that fabric at the #KashmirHumAwards2019?  Sadly we had to swipe her down.

In short, we feel Hania really needs help. The colour of her sari suited her fair skin, but it isn’t the look you wear at one of the biggest award shows of the country. Last year she tapered off in the neon yellow and organza cape Hussain Rehar outfit, and then she looked good in the dark green gown by Nomi Ansari at another award show despite wearing the hanger loop half of the evening. It is safe to say that, Hania does need to up her style game whereas her partner, Asim looked fab while making a statement. 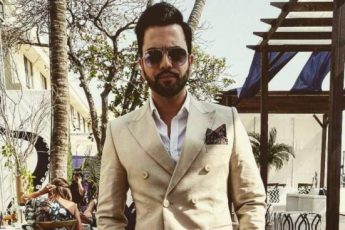