Hum Tum aired its last episode on Eid Day 1 and we are having mixed emotions right now. We are sad that this delightful little show has come to an end, but we are extremely happy that this project graced our television screens and added fun, laughter and humor into our lives. From the word go, Hum Tum was a runaway success and every aspect of the show right from performances, to writing, to screenplay, all the way to production design and styling contributed to that.

Hum Tum gave us characters that will stay with us for a long time. Whether there’s Daddu Handsome, the patriarch Qutubuddin, Nani, mothers like Ulfat and Haleema, and a father such as Sultan. Even the little sisters Maliha and Sasha brought innocencecharm to the screen.

Talking about the four leads, SarahKhan as Maha and Ahad Raza Mir as Adam were sensational but it was Ramsha Khan’s Neha and Junaid Khan’s Sarmad that stole the show. Neha was headstrong, opinionated, a rebel, brave, bold, just, and courageous with a mean competitor’s spirit. And yet, she had a soft side to her that she never shied away from showing to the people she loved. She was everything everyone should aspire to be like; girls and boys. Sarmad was funny, silly, a romantic at heart, and a walking talking ball of mush, the softest character on the show, followed by Maha. He was respectful, tender and extremely loving towards his wife and cared for everyone around him. He also showed us there’s no harm in men running the kitchen of the house.

We loved these characters and became so invested in them as we watched their lives unfold before us everyday for the past month. It is time to bid them goodbye as we take you through the last episode of the blockbuster show with a big heart called ‘Hum Tum.’

Maha(Sarah)comes home and patches things up with Sarmad(Junaid). The two apologize for their behavior and became our favorite couple again.

On the other hand, Sarim(Omar)can’t tolerate it when he sees Adam(Ahad) holding Neha’s(Ramsha)hand. He forcefully grabs Neha’s hand and is trying to take her away even when she tells him she doesn’t want to go with him. That’s when Adam intervenes and stands between them.

Sarim immediately goes to Neha’s home and tells everything to Qutubuddin(Adnan)who brutally insults and reprimands Adam without even knowing the whole thing.

Neha gets really upset with the way her father scolded and treated Adam. Maha asks her why she is crying to which she says that’s because Adam is her friend, still unbeknownst to the fact that she too has fallen for Adam.

Qutubuddin talks to Neha about what she wants. That’s when Neha points out everything wrong that her father has done that has led them to that point. She reminds him of his behavior towards their mother and his constant taunts of giving birth to girls and not giving him a son. She tells him how she would act out just to get his attention because he gave all of it to Adam all her life. She opens her heart out to him while Qutubuddin apologizes for his mistakes. Both Adnan Jaffer and Ramsha Khan were superb in this heartfelt scene. Khan’s acting is nothing short of watching an artist at work.

On the other side of the wall, we see Maha making attempts to cook and Sultan(Farhan)finally becoming aware of his responsibilities. It is happiness and smiles in the Sultan household. 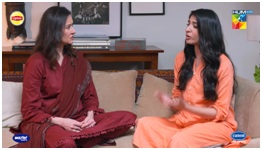 Ulfat(Arjumand)is sad after Neha’s engagement with Sarim gets called off. She thinks what will people say since one of her daughters got divorced and the other’s engagement came to an end. Here, Neha says something profound and poignant which is a lesson for the parents our there. She says, “Instead of marrying off your daughters to toxic men, it is more important to educatethem. If that means getting married a little later; big deal.” 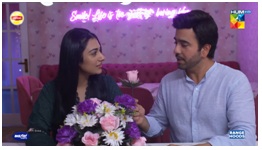 Towards the end of the episode, we learn that Maha and Sarmad are about to become parents. 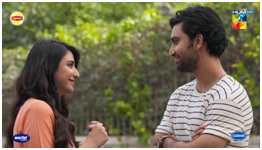 While Adam and Neha profess their love for each other. 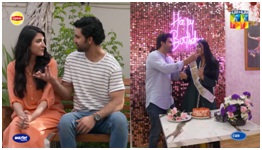 In the end, both the couples are seeing sharing sweet moments with each other while in the background, you can hear the lyrics, “Hum Tum milayna, jaanejana, RABB da faisla.” 😊