HUM TUM EP 30: ADAM IS SAD TO SEE NEHA WITH SOMEONE ELSE

Hum Tum just aired its second last episode tonight and it was high on emotions. It looks like our favorite couple might not end up together. There were some serious display of emotions tonight from Ramsha Khan’s Neha and Ahad Raza Mir’s Adam. Their chemistry is so good you can’t help but root for them to be together. Ramsha is a phenomenal actress and her performance on the show is proof of it.

There’s a lot of fun and comedy too. Junaid Khan’s Sarmad probably has the most hilarious dialogues on the show right now. His scenes always end up being the funniest. Khan has really revealed his comedic side on the show and we are here for it.

Sarmad(Junaid) and Maha(Sarah) get into an argument because Maha gives Sultan(Farhan) the responsibility to manage catering for Neha’s engagement. Sarmad is worried because Sultan has gone onto change the entire menu at the last minute. Sarmad says Maha should have asked him before doing that. Maha says Sarmad should give Sultan a chance. She remains upset with Sarmad throughout the episode.

Neha and Sarim(Omar)get engaged while Adam takes pictures of the event. Our hearts truly ached for Adam in this scene.

Neha can’t shake the image of tears in Adam’s eyes. She remains restless until she talks to him. She asks him why is he doing this. Adam asks her why can’t she spend her life with a friend. At that moment, Sarim and his mother come to check up on Neha who had said she wasn’t feeling well.

Sarmad and Adam talk about the Qutub girls in a hilarious scene.While Sarmad says they show a lot of attitude, Adam says they are straightforward and nothing else. Sarmad says ever since Adam has started using his head instead of his heart, he has become sukoon.com. Hilarious dialogue and brilliant delivery. 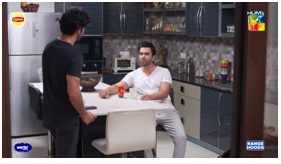 Adam tells Neha that she may not love him but he knows she feels something for him but she won’t admit it. 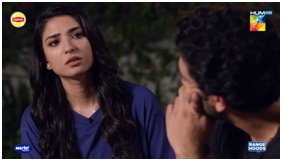 Qutubuddin(Adnan)takes off Neha’s name from the project in Germany because of Sarim. He doesn’t want Neha to spend any more time with Adam. It is clear he is jealous of Neha and Adam’s closeness.

What will happen in the last episode? Will Neha and Adam end up together? Or will this story have a sad ending? To find out, watch the last episode of Hum Tum on tomorrow at 9 pm only on Hum TV Network.