Hum Tum is delivering laughs and entertainment everyday and we are here for it. The sitcom is loaded with moments of hilarity, silliness and laugh out loud moments which make the show such a delightful watch. The simple story is executed and brought to screen beautifully by the writer and director and has been performed by the cast. Ramsha Khan deserves a special shoutout for being the most entertaining and vivacious character on the show. She’s a live wire who stops at nothing and is so fun to watch. Junaid Khan as the sweet and caring Sarmad is such a breath of fresh air. He is calm, composed and is often deescalating tricky situations. Read onto find out what happened in the latest episode.

After dinner, it was time to open Adam’s (Ahad) birthday presents and the first gift to be opened was from Neha(Ramsha). It was several boxes packed into one another and the smallest one had a silver spoon inside it. To add context, Adam’s father puts it hilariously when he says the silver is to specify how old Adam has turned and the spoon represents Adam’s ‘yes sir’ attitude towards Qutubuddin, Neha’s father. Neha is left embarrased because she knows her father would be upset about this. 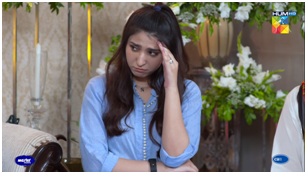 Adam is angry and upset over what Neha did but Sarmad (Junaid) tries to reason with him. The two have valid points. Sarmad explains how Neha acts out because her own father loves and adores Adam more than her. Adam says he likes Qutubuddin’s attention and love because he never got it from their father who never accepted his responsibility that he has towards his family. 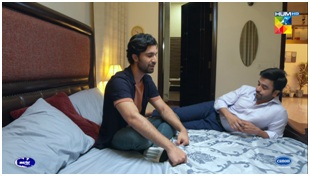 While the girls wait before they are presented before their father, they have a laugh with their grandfather about the whole ‘chamcha’ thing. This shows how despite the situation, the girls never get too depressed or sad about anything as long as they are together. 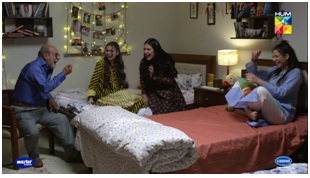 Adam and Sarmad learn that their father has sold Adam’s bike because he needed money. While Adam is angry, Sarmad is in disbelief and doesn’t know what to do. 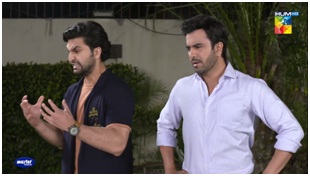 Soon, Qutubuddin (Adnan) scolds the girls especially Neha for being mischievous, ill-mannered and constantly picking fights with Adam. He again blames his wife for her poor upbringing. 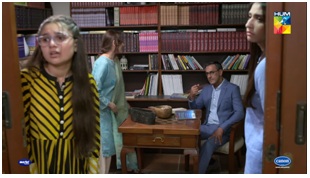 We learn that from a young age, Sarmad took responsibilities of the family. He had to quit his education and start his restaurant to support the family because their father was busy losing money on senseless bets without a care for his wife and kids. 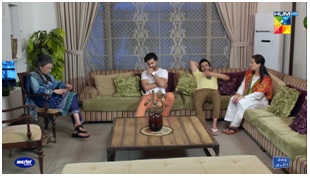 Neha and Adam engage in a war of words after Adam’s birthday fiasco. Sarmad and Maha (Sarah) intervene and break the fight apart.

This is followed by a pillow fight between the three sisters which their grandfather live streams on Instagram. In a spur of the moment, Neha sends a pillow flying in his direction which cause him to drop and break his phone. Another hilarious moment of the episode. 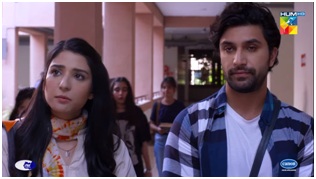 The next day, Neha apologizes to Adam in front of her father. In university, another professor accuses Qutubuddin (Adnan) of favoritism towards his daughter and awarding her more marks. Neha interjects because she can’t bear anyone doubting her father’s credibility. One thing that remains constant is Neha standing up for her father’s honor and respect despite having a rocky relationship with him. This represents Pakistani children about their parents in a nutshell.

To find out what happens next, keep watching Hum Tum on Hum TV and watch this space for more reviews.