Ishq E Laa ep 4 begun with highlighting an important issue that prevails in our society; intolerance and the fact that the fight for justice will end up in violence. Shanaya’s conversation with her mother reveled an important trait of her character which shows that she’s willing to take risks without realizing the consequences, which seems foolish. On the other hand, can I just say that we’re kind of done with Azka incessantly crying over everything wrong in her life? I would like for a strong character like hers to take the lead in achieving her life goals. So, at this point in time, I’m a bit confused about what’s going to happen for her next.

Here’s a run down of Ishq E Laa ep 4. You can also ready the review of ep 3 here 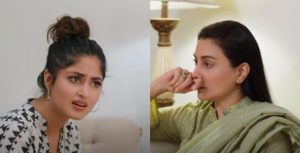 Shanaya’s mother drops the “marriage” bomb on her when one of her old friends proposes that their children be married. And even though Shanaya argues over the fact that she’s waiting for Azlaan to come around so they can discuss their future plans, her mother reminds her that she will not accept a situation where Shanaya has to wait for him to figure things out. Therefore, Shanaya, for the sake of her mother and (probably knowing that she’s right after all) considers to meet Fahad. Shanaya may be wise when it comes to her professional life, however when it comes to the matters of the heart, she’s struggling.

Azka is still fraught over what happened at the Azlan’s house and continues to question and defy the class system in our society. So, upon finding out the truth about why Azka and his mother refuse to be proxy at Azlan’s house, Sultan storms out of the house in support of his sister and rejects the offer to continue his work as a cook. It was refreshing to see an example of a brother like Sultan who commands respect for himself and his family in spite of belonging to the lower social strata, and therefore, understands his sisters pov and concern. 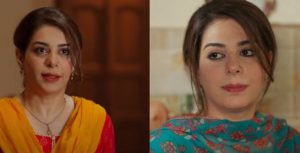 THE TWO SIDES OF KANWAL

So far we’ve seen Kanwal unjustly subject Azka and Khatija even though they are gentle and caring women. Till Ishq e Laa ep 3, I had assumed her to be a complete villain who is forcing Azka to marry a criminal like Abid. However, last night we saw a glimmer of light and likeness in Kanwal’s eyes when she spoke to her khala nicely about the things that make Azka a good person. Leaving me to wonder, that Kanwal doesn’t seem to be a bad person after. She’s rough, but also has a good heart.

WHO IS AZLAN REALLY?

Azlan and Shanaya end up buying a gift for his mother and even those he makes it clear that he prefers to make his own choices, but after seeing Shanaya getting upset over his remarks and that he only needed her for her company, he decides to settle with her choice, which led me to wonder if Azlan is confused about his feelings for Shanaya. And later on when the glass vase breaks, following the conversation Shanaya has with Azlan, I liked how Sajal tried to make sense of the situation with “ghaltiyan tu hum insaanon se he hoti hain” and it instantly took me back to the time when Azka broke the perfume bottle.  But Azlan made it evident that he doesn’t even expect himself to make a single mistake and wants perfection, thus putting himself and others in a difficult position without even realizing it.

SHANAYA DECIDES TO TAKE CONTROL OF HER LIFE

I’m glad that Shanaya didn’t decide to wait for Azlan and acted up straight by taking the reigns of the dilemma that she’s in about her proposal. So she calls Azlan to discuss the proposal that she’s received, and is left befuddled over Azlan’s reaction and immediately walks away.  Then we see a heart broken Shanaya praying that Allah changes her destiny if she’s not meant to be with Azlan and agrees to marry Fahad.

Was Ishq E Laa ep 4 a great watch? Well, sort of, but there were a lot of repetitions and mostly focused on Shanaya and Kanwal or a bit of Sultan, whereas the rest of the characters were at a stand still. I still trying to peel the layers of Azlan’s character, even though he’s the main man who’s supposed to go through the major divine transition in his life. So probably the writers have a good reason behind it. Here’s to hoping for ep 5 to be a bit exciting. So let’s wait and watch.