Wahaj Ali’s character remain the most important aspect of the narrative in Geo TV’s Jo Bichar Gaye. His Rumi is the driving force of the story. Without him, the story would have no emotional heft or intensity. The Rumi we are seeing on our screens right now is an altogether different man as opposed to the Rumi we saw in the first few episodes.

The current Roomi  is a gaunt looking man who looks like the ghost of the younger Roomi. He has dark circles under his hollow eyes. It feels like he has seen horrors that are forever etched in his memory. He has hold, unkempt locks that he ties in an untidy ponytail. He talks with caution, he is wary and has lost all trust in mankind. All he wants is to protect his family.

RUMI ENDS UP KILLING SOMEONE

In this episode titled ‘Uncivil War’, Rumi (Wahaj Ali) ends up killing a man in cold blood. There is no remorse, or fear in his eyes. He moves like a killer with quiet, but determined footsteps. It was a thrilling scene from start to finish.

After being gone for months, he shows up at his house where Sonia (Maya Ali) lives with her family. She is relieved to see him but isn’t expressive about it. Rumi tells her stories about where he was and what he did when he was missing.

RUMI WANTS SONIA TO SAVE HERSELF & HER FAMILY 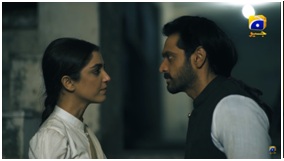 In the last scene of the episode, Rumi tells Sonia that he is a rebel and martyrdom is his destiny, but he asks her to move to West Pakistan because the East is no longer safe for her and her family.

Wahaj Ali’s Rumi is one of the most exciting characters on television right now. He is giving it his all and it shows in the performance. We can’t wait to see what happens next. Will he be able to save his family? Or will he die trying? To find out, keep watching Jo Bichar Gaye on Sundays at 8 pm on Geo TV.