KASHF, 3 REASONS TO WATCH THIS DRAMA RIGHT AWAY; JUNAID KHAN

We have just one word for you: KASHF

And we’re super psyched to see Junaid Khan back on our TV screens with the much-loved, Hira Mani, and it’s no news how exciting the duo is on screen with their latest drama serial, Kashf directed by the veteran, Danish Nawaz and written by Imran Nazeer.

Kashf had been making rounds for several reasons before it aired on HUM TV, and for some very peculiar reasons. So, we got in touch with Junaid Khan and asked him why YOU should be watching Kashf and what makes it so different from the other TV serials.

The concept of Kashf has an interesting twist to it for a story line because it is something that we’ve not really seen on Pakistani television before. Kashf is a girl who can predict future events that she can see unfold in her dreams. And this ability of hers wreaks havoc in her life as well people who are connected to her whilst she copes with this helpless situation.

You’d think that the plot is kind of like the Hollywood movie, Final Destination type, however Kashf will have hidden meaning, perhaps some controversy with mystery and stories of others characters intertwined in this drama serial

This is the fourth time that Junaid Khan and Hira Mani are coming together for a drama serial. Before Kashf, this super-hit jori has been seen giving some interesting performances in Sun Yara, Thays, and Mohabbat Na Kariyo where they’re pairing and chemistry has been worshiped on screen.

EVERY EPISODE WILL KEEP YOU GUESSING

Kasfh surpasses the stereotypical saas-nand-bahu clashes, and deals with something that is not spoken about at all and in some parts of the world has a social stigma attached to it. Therefore, every episode of Kashf will leave it’s viewers with a revelation or an inkling, where you’ll be second guessing everything that happens to and around Kashf and how she manages to deal with anxiety in her personal and social life that comes with her dreams turning into reality.

Moreover, Danish Nawaz, who has already worked with Junaid Khan, has executed every episode like a masterpiece. 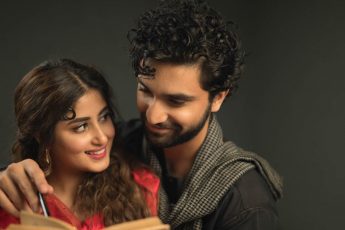 REASONS WHY WE ARE EXCITED TO SEE SAJAL ALI IN AANGAN