Mehwish Hayat is one of our favourite actors from the Pakistani industry. Her work is unparalleled and her acting prowess formidable. Which is why, when we heard that she was receiving the Tamgha-e-Imtiaz, it made absolute sense. We spoke to Mehwish Hayat in an exclusive tete-e-tete. Here is everything she told us about her big win.

1. How important do you think it is for artists to receive acclamation from the government?

I think that anybody craves recognition from society no matter what profession that they are in. The film industry has been making great strides over recent years. Rescuing itself from the abyss, where Pakistani cinema had virtually died out. We, as an industry, contribute a great deal to the economy of the country and represent a more positive perception of Pakistan on an international platform. To have artists receiving civil awards from the government is affirmation that we are doing something positive for the betterment of our nation.

2. We have seen an uproar of reactions since the announcement- both negative and positive. What’s your take on this?

Everyone is entitled to their opinion – this is part and parcel of being a public figure. You cannot please everybody all the time. However, what has been somewhat galling is when people are failing to understand how civil awards are awarded and why. There is a stringent vetting process after the nomination involving at least two separate committees before it is submitted for final approval to the Head of State. The award is being made in recognition for my contribution to the arts (acting). The award is specifically for those in the arts. Thus, my award has not deprived anyone from military or any other field from their due as is being quoted by some. I have delivered five of the biggest hits in Pakistani cinema and am the highest grossing film actress at the box office. I am a little perturbed by the fact that this is being being overlooked in some quarters and focus is being diverted to the frivolous and unnecessary. 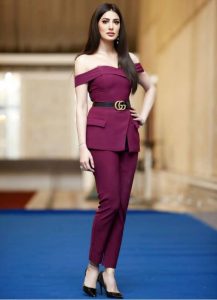 3. How do you deal with negative feedback?

The one thing that I will say out loud is that I am very honoured as a Pakistani that the highest office in the country has bestowed this award upon me at such a young age. No negativity will take that away from me and I will not allow the skeptics to rain on my parade. However, discuss all you like about whether I should get this award or not. After all we are a democracy. And everyone is entitled to their view. However, when the discussion is dragged down to the gutter by some media and aspersion is cast on my character then that crosses a line. That I will not allow and I will fight it till my last breath. It is such a shame that even in 2019, a woman cannot be celebrated for her achievements without her character being bought into question.

4. Your message for the fans whose support has won you this huge honour today?

I am blessed to have fans support me through this amazing journey. When at 3am in the morning after 18 hours on set and with several more to go, it is their love and the thought of not letting them down that keeps me going. The fans reward me each time they dig into their pockets and part with their hard earned cash to buy cinema tickets to see my films. What better testament to their devotion could there be?

5. It’s a huge milestone for an artist to receive Tamgha e Imtiaz. How do you think will this affect your career?

With this award comes a tremendous responsibility. I know from the numerous messages I get that many girls look up to me and the characters I portray as role models. Even more, I owe it to them to set an example that anything is possible if you follow your dreams. As far as career is concerned, I have always had a game plan in place for where I want my career to be going. And never in my wildest dreams would I have seen this award coming! So who knows what destiny holds in store for me. I definitely don’t expect to be treated any differently by my industry peers than I was before the award. If anything I would probably be working doubly hard now since expectations from the public have changed.

6. As a female artist of immense talent, you influence a lot of young girls. Do you enjoy this responsibility – or does it come with certain disadvantages?

It is a tremendous responsibility when so many impressionable young girls look up to you. It is a very fine line that one is continuously treading. You are trying to encourage them to be more independent and take responsibility for their own lives while at the same time understanding the cultural mores of the society we live in. I hope that even seeing what I have been subjected to over the past week shows them that holding your head high and with dignity is the best course of action! No matter what is thrown your way!