Jawani Phir Nahi Ani is all about name-dropping, blatant sponsorships, bikini-clad women and scanty outfits. But all this is whole-heartedly discounted over the fact that the film is a grand reality escape that every Pakistani needs in form of remarkable tongue-in-cheek humor that’ll have him/her hollering of laughter for two and a half hours straight. 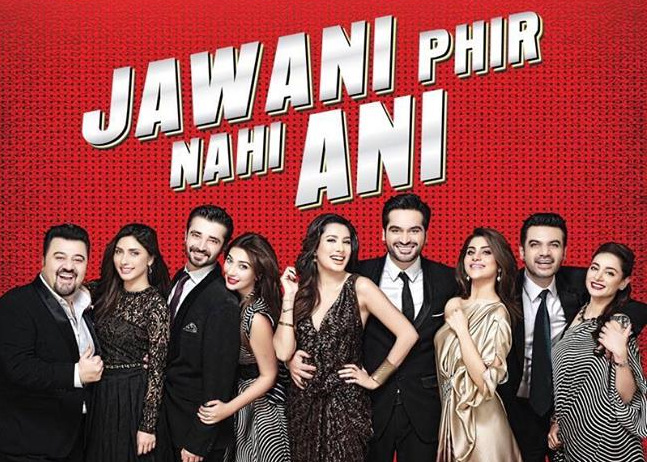 Made under the banner of Six Sigma productions and ARY Films, JPNA brings together the dream television-cast to the silver screen. The story revolves around Humza Ali Abbasi, Ahmed Butt and Vasay Chaudhry who play the main lead of three middle-aged men, living an alienated life. If it isn’t their monotonic work schedule that’s sucking the life out of them, it’s also their marriages that hinge over a healthy dose of regret. Almost all of them have either fallen out of love (Ahmed), seek love in places other than home (Hamza) or are too scared by the wife’s feisty temperaments to demand for anything more than just an extra sheet of blanket (Vasay).

Enter Wicked Sherry(Humayun), the trio’s childhood friend from America, notoriously famous for one thing and one thing only, being a successful divorce attorney with a success rate of 99 courtroom divorces. His hunky, heroic figure not only adds starrer-quality to the screen but also proves to be fateful discourse for his friends’ dreary lives. He is charismatic, scheming and extremely persuasive, managing to take his friends away on a vacay to Bangkok.

From here on the movie is a labyrinth of twist and turns and boys going wild! Following the motto of, what happens in Bangkok stays in Bangkok, the three men get trapped in a convoluted web of loyalties and lies.

This isn’t all. The plot thickens as Sherry’s love life comes in focus and the audience are forced to the edge of their seats (and sometimes off their seats laughing) through the comical turns of determining Sherry’s girl.

Amidst all the lies, love, confusion, confession the boys are left with just two options: run for their lives, or man up and take a bullet, but life has a funny way of uncoiling itself. Just as the narrative falls into clichéd loopholes, Vasay Chaudhry’s scripted masterpiece pulls the audience out and pushes the story forward. His storyline, which spans over 150 minutes, brilliantly encapsulates how fate loves surprising detour and trick endings.

Jawani Phir Nahi Ani, can easily be capped as this year’s strongest release for a simple reason that it had an ace quality storyline and script. Vasay, who’s known for his wit, has, in all honestly, outdone himself. He not only brings glimpses of Saima Chaudhry back for Bushra Ansari’s character in the film, but also introduces highly relatable characters such as that of a tech-savvy, twenty-something girl (Sohai) who only talks in acronyms, selfies and hashtags; and stereotypical Saudi and pashtun attributes connected with Ismail Tara and Sarwat Gilani’s roles . 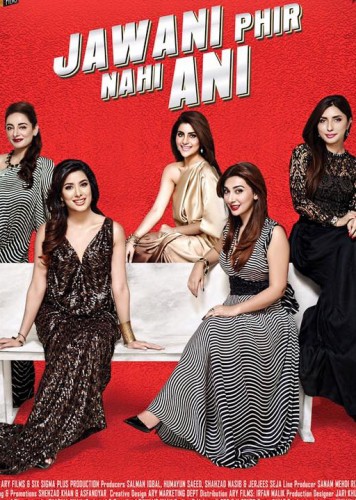 For the first time, we also see Pakistani movie taking a jab at its politics, pop-culture, as well as cinema across boarder. From Humayun adopting the role of a pretentious Shah Rukh Khan to Humza Ali Abbasi who becomes the butt of a joke by being called “Pyaare Afzal” and as someone who only “uploads Facebook Statuses.”

To sum it up, Jawani Phir Nahi Ani, needs to be applauded for presenting the perfect recipe for a hit. It portrays well timed humor, ingenious acting skills, action, drama and a spicy yet cliché love triangle intertwined with visually appealing (yet mildly lacking in synchronization) dance numbers that’ll keep the audiences entertained. Pakistani cinema witnesses an exponential rise since its revival and with this as the last major release of the season, its time to bid adieu to 2015 on a high note.