There probably isn’t a soul in the country who doesn’t know that Fawad Khan’s new Bolly flick Kapoor&Sons released this weekend. Much anticipated and talked about, the film is produced by Karan Johar’s Dharma Productions and star Fawad Khan, Alia Bhatt, Siddharth Malhorta and Rishi Kapoor!  Yes, you all know that! But if you haven’t seen the film, here are somethings you don’t know (don’t worry its a spoiler free review)

As you may have guessed from the promos, the film is about a dysfunctional family. Arjun (Siddharth) and Rahul (Fawad) are brothers and Mr. Kapoor (Rishi Kapoor) is the grandfather. The film revolves around the relationship of the boys with their parents, their parents relationship with the boys and each other and a really funny (at times too funny) grand father. 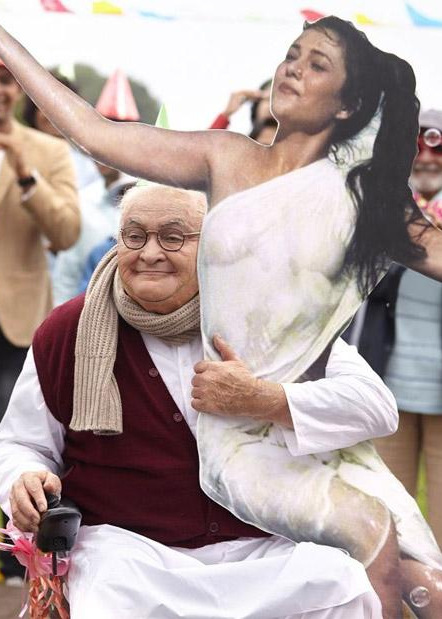 The film handles the elements of unsaid family friction perfectly. You can feel the characters emotions, their inner conflicts, their insecurities very well, so full marks to the actors. Without even saying much each characters personalities, their life and their reactions to situations are clear to the audience, making it a very strong case of good script writing, characterization and direction!

Alia is herself, by that we mean we have seen her play such roles and look this way many times, so there is nothing really new about her. She is a great actress, that’s a given, but the role doesn’t have anything new, but whatever she does in the film, she does it well!

Siddharth, who we have never really counted as much of an actor was really good in the film. He plays the role of the youngest in the family, some one who isn’t the apple of the parents eye (like many of the younger siblings) and over shadowed by his more handsome and successful elder brother. Struggling with this complex while keeping his dignity and control so as not to hurt or disturb his family, Sid gives a subtle yet strong performance making Arjun a lovable boy and extremely relatable.

Fawad, the reason many of us will watch this film is, well…Fawad. And probably why we love him so much. He is the ‘perfect son’ (as said many a times by his parents in the film). Successful, handsome, loving and level headed, and somewhat mysterious, he does come across the perfect guy. The guy who has everything and some, but he is flawed in his own way. Fawad’s acting is strong as expected, and he makes Rahul very very believable.

With just a few songs, the score is fun, nothing over the top and the main song is quite catchy too. The styling of characters is perfect almost. Alia looks like a young fun girl in her distressed jeans, crop tops and fun kurtis. Siddharth is the not so suave boy in his checkered shirts ad loose lettered T-shirts, while Fawad is the perfect man in his well fitted shirts, sweatshirts and perfect hair. Rishi Kapoor was almost unrecognizable as the old grand dad owing to great make up and wardrobe!

Overall, its a good watch. Nothing life changing or something you would want to discuss and think about later on. If you are a woman, and watched the film late at night, chances are you will dream of Fawad, but that is about it.

Go to the cinema for an entertaining 2.5 hours, don’t go for a life lesson (except that all families have issues). More importantly, remember its a film, don’t come out judging anyone for the roles they play in a (fictional) film. What do we mean by that? You will know when you watch Kapoor&Sons!