Mushk episode 17 was a smart showdown of Roshni’s track, thanks to Adam for going through all that trouble for everyone’s sake. We had no doubt that he would save the day and in this process we’d get to see and feel how conflicted he himself is over his feelings for Mehek. At the same time it was also relieving to see that Guddi is coming to question her growing feelings for Adam and yet stay in charge of her life.

So last night in Mushk episode 17, I’m glad that a lot of the situations revolved around Adam and his feelings for Mehek, he is just so selfless and in a harsh world like ours, men like Adam rarely exist. And the ones that do, well they get hurt in the end and Mehek hurts him with her truth (that only Guddi and Adam know).

Anyway, so here’s a breakdown of Mushk episode 17 and some questions that we’re going to leave for the next review.

So Roshni is finally returns, however the way with which episode 15 and 16 were dedicated to her big plan to elope with Saqib quickly fizzled out when she is shown narrating Adam about it because I was hoping for her to mention Guddi’s name, who helped her make the run. And Adam is shown understanding and consoling her into going back home with her since everyone’s eagerly waiting for her return, and at the same time, comforted her that her family wouldn’t be upset with her. They’re conversation on love tests us all was enriching. However upon Roshni’s return, despite crying her eyes out Zulekha was in such a confused state, both happy and upset, so I was glad to see the sequence of events flow naturally. She was grateful to both Adam and Mehek for trying their best to recover Roshni and bring her home. Sehar Khan did a fabulous job over all

GUDDI IS IN LOVE WITH ADAM

Guddi is in love with Adam and I love how she balances out her feelings for him and continues to work on avenging Tayee. But Adam knows that Guddi doesn’t do anything without any gains, therefore it’s hard for him to even look beyond that. And if you see closely, you’d realise Mehek and Guddi are the same, both of them are selfish and want something, but Adam is the selfless soul, who’d do anything for the one he loves, who in this case happens to be Mehek. And Mehek is still unable to figure out Adam’s motives.

In Mushk episode 17 we finally get to see Adam in a troubling state of mind and as he struggles with his feelings for Mehek so openly versus the doing the right thing. However the highlight of the episode for me was when he ended up in prayer and asked for Mehek’s happiness and not for what he actually wanted – her. To ask and want for what makes your loved ones happy is undoubtedly the most noblest thing anyone can ever do.

Having the Peer sahab in town to bless Shayan and his daughter’s umiom, Muqaddar Khan looked like a puppet who regards a mere man a high place for all that he has in his life. And this action of his also shed light on the kind of culture that we live in, that happens to exist in small villages where people worship men in power and are emotionally and psychologically abused in the name of Allah and mercy. Even though Shayan’s story has been going dead slate but we’re hoping for some real time action to come alive because Adam will soon be taking Mehek to see him.

Here’s what happened in Mushk episode 16. 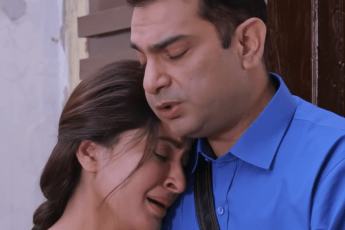 Here's All You Need To Know About 'Pardes'