OSCARS 2019: OUR FAVOURITE MOMENTS AND WINS

The 91st Academy Awards turned out to be a fantastic night as expected from the prestigious platform. The night shone bright as a plethora of celebrities came together for a star-studded event! Of course, we were delighted to see, as always, the glamour, the fashion and the edge-of-your-seat announcements. This year, some of our favourite movies were nominated. So when the Oscars 2019 began, we were buzzing with excitement. 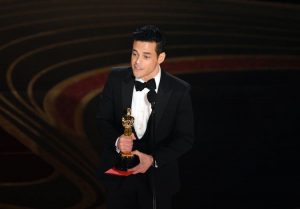 This is a no shocker! Bohemian Rhapsody was undeniably one of our favourite movies in 2019 so far! The film won awards for Best Sound Mixing, Best Film Editing, Best Sound Editing and of course, Best Actor for our favourite boy Rami Malek.

Malek is the second actor of Arab descent who has ever been nominated for an Oscar. He thanked Queen and acknowledged the incredible story of Mercury’s life.“The fact that I’m celebrating him and this story with you tonight is proof that we’re longing for stories like this,” Malek said.