OUT OF THESE 12 CELEB COUPLES WE REVEAL THE COOLEST PARTNER

The idea of love and being in love is the most beautiful feeling and as sappy as the human heart is, our entertainment industry is also abuzz with love. We have couples, singles who are dating and engaged people whom we love seeing together every chance we get.

But quite often one feels that one partner stands out more than the other which can be attributed due to their vivacious personalities, down to earth nature or simply being more fashion conscious than the other.

So, wanting to do a listicle based on our favourite celebrity couples, we decided to add our own little twist by talking about who is more cooler than their partner.

An Australian girl with a lot of sass married a cool Pakistani cricketer. Shaniera Akram has literally won over the nation with the way how she’s adapted to the lifestyle in Pakistan and emulates the cool-Pakistani chic that we love her to be. She’s supportive, raises her voice over important issues and social causes while managing a life so gracefully.

A good looking duo where one is a rock star while the other an actress and now a producer, Farhans popularity soared a lot higher than Urwa when he became part of Suno Chanda where his character Arsal’s on point comic timing with witty dialogues won everybody’s heart.

We’ve heart Farhan has a funny bone and make you laugh till you cry with tears of joy AND THAT makes him the coolest!

Now where Yasir does enjoy his own fan following, it is Iqra who is the coolest in the relationship as she is always smiling and praising her husband with very cute posts on social media. They have quiet the out and about personality on social media, but we keep our eyes on Iqra who shows off her spunk and spark in the fun-nest way!

With both winners in their own way, their simple wedding was THE talk of the town couple of months a go, but who is cooler than the other is a difficult question to answer as both are dynamic and too perfect in every sense of the word. BUT we’re leaning towards HAMZA! (sorry) for his good looks and his undeniable swag!

Hania is easily one of the most talented young actress we have in the industry while Asim stands out for his soulful voice but ever since the duo began dating we have seen Hania change in to a calmer person as beau Asim is easy going with a deadly humour which makes him the coolest out of the two as he showers her with praise, respect and love which also sets as an great example for the youngsters out there.

Young, good looking, well dressed as well as a hit on screen pair who are about to get married soon, like Hamza and Naimal one cant pick one over the other but if we have to choose than Ahad is the coolest as he along with being a superb actor is also a musician who loves theatre and does not shy away from showing the world that he is indeed a proud mamas boy.

Aima Baig wins the coolness factor hands down from stiff actor and producer Shahbaz Shigri who is smitten by her but the charmer in the relationship is Aima who steals every frame with her rockstar wardrobe, smile and innocent eyes.

They’re both super fun, super out there and hilarious. While Mani is at home, balancing life and kids, Hira is out there making a living and shining with her back-to-back performances. She is the quintessential Bollywood girl living in Pakistan and making her dreams come true, and that’s pretty cool!

Now we know that you all must be thinking that Ayeza wins here but the truth is that it is Danish who is cooler than her as he stands by her with his head held high in pride as she balances family and work with ease with his 100 % support all the way and a smile which never fades when she is with him.

With Ali facing a difficult phase in his life with the sexual allegations bought in front by Meesha Shafi , the singer/actor was able to deal with the ordeal due to his wife Ayeshas strength who stood by him like a rock. With her belief in him and confidence, Ayesha is the coolest for sure as she handled the whole situation with grace which is a quality very few people have.

A very private couple who seldom share personal news, Atif has a wicked sense of humour which can be seen in his posts on Instagram and with him melting everyone’s heart with his unique voice, the rock star is definitely the coolest out of the two.

Zara and Asad make such a perfect pair and their private moments make them all the more real. But out of these two, we think Asad seems more chilled out and fun, not that Zara isn’t the same, but she brings the depth to their relationship. Ahh! We’re thinking to put them on the equal for equal for challenge.

So who in your opinion is the coolest partner from the couples mentioned above?
Share your views with us in the comment box below. 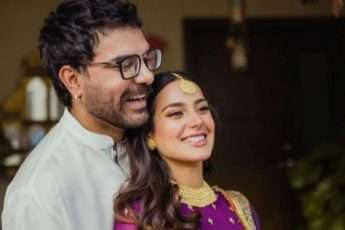 Iqra Aziz And Yasir Hussain Are Expecting Their First Child