We’ve all been there, admiring racks and racks of clothes in our favourite stores before finally selecting a piece that we just couldn’t leave without. So imagine if you could step into the future with an app that could give you detailed visuals, and help you decide to get the outfit that you’ve been eyeing for a while?! Fret not, because the tech wizards at Cresset Technologies just heard our (unspoken) prayers by launching the world’s first ever 3D enabled Augmented Reality fashion app by Sapphire for eastern wear.

Tech is the future of fashion and so the idea of a fashion app that’ll give you a 360-degree view of an entire outfit with intricate details such as embroidery and embellishment before you make the big purchase is unique. Cresset Technologies has definitely embarked on achieving a major mile stone in the arena of fashion, so three cheers to that!

Since we know that Sapphire is one of Pakistan’s giant retail brands and the most popular, with the release of 130 outfits for their Spring/Summer Collection 2018, the 3D Augmented Reality app that also features Virtual Reality features has been launched by associating with Sapphire. The Sapphire AR app is going to forge doors for the drift of e-commerce to play a monumental role in helping their clientele embrace this app because fashion companies understand how their customers use technology – word, Smart phones!
So, we were pretty excited and immediately downloaded the Sapphire AR app, and this is what we found:

In reality, fashion and tech are inevitably going to become one and the intermixing of the fashion industry with innovation of tech is going to light up a customer who has had a user-friendly experience. 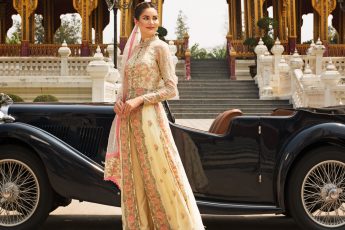 GUL AHMED SUMMER 2019 LAWN IS EVERYTHING YOU NEED

THE BEST & WORST DRESSED AT THE IPPA AWARDS 2018