Today, Team SiddySays brings you a review of the hip-hop rom con, Romeo Weds Heer. This is a light-hearted romantic serial which has punches of comedy as well. It stars the popular on-screen couple from Khanni: the dapper Feroze Khan and the stunning Sana Javed as the lead roles.

Romeo Weds Heer is written by the comic genius Mohammad Younis Butt. And Anjum Shahzad is the director. The cast is further supported by the talents of Shafaat Ali, Firdous Jamal, Ali Safina ,Tara Mehmood, Saman Ansari, Mariyam Nafees and others. 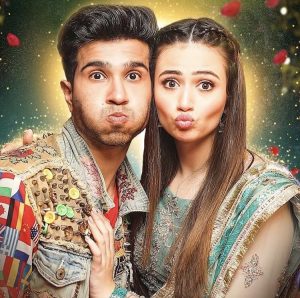 Romeo Weds Heer revolves around the lives of Romeo (Feroze Khan) and Heer (Sana Javed). As they face different circumstances together, sometimes certain events push them towards each other. And some times they create obstacles for the lovebirds. It is a contemporary story of falling in love with a twist. The drama is one that keeps the viewers hooked into their screens eager to know what will happen next.

The supporting cast is commendable in their performances in this serial. They give their audiences a much-needed punch of comedy every now and then.

Romeo Weds Heer is like a breath of fresh air for Pakistani audiences. Because for most fans, TV channels are saturated with serials revolving around crying, oppressed women and ruthless men. With its talented cast, its exceptionally well-written script ispacked with just the right amount of comedy. Further, it has carefully directed scenes. Which is why, RWH has gathered a huge fan following in just the short time that it has been running on air.

The serial is also gaining immense popularity among the masses for its OST – sung by the incredible duo of Aima Baig and Sahir Ali Bagga. We simply love it.