If Alif’s star cast wasn’t enough to excite us, the teasers have certainly grabbed our attention. And the latest teaser has proved that why ALIF has been the most awaited drama of the year 2019 since we saw Hamza Ali Abbasi  and Sajal Aly in one frame. And the cherry on the top is the writer, Umera Ahmed.

Hamza Ali Abbasi is essaying the role of Qalb-e-Momin and Sajal Aly as Momina Sultan in the lead characters. The story revolves around the struggles of Momina who is a budding actress and Qalb-e-Momin who is a bold movie maker as they ask pertinent questions such as the love of God.

Set to release tomorrow, September 26 on Geo Entertainment, Alif is carrying the weight of the masses and here’s why we’re so psyched to watch it.

UMERA AHMED’S THE CAPTAIN OF THE SHIP

“Ishq banday se laiken umeed khuda se rakh”… Umera Ahmed is known to bring a strong element in all her plays whether in the form of a character, trait or a force beyond comprehension. Alif may bring the love of God in play but we’re also looking forward to see Sajal’s character in motion because Umera writers strong roles for her protagonists, despite all the hardships, rediscovers, evolved and perseveres.

ALIF IS A PATH TO SELF-DISCOVERY

The teasers showcase the spiritual journey of Qalb-e-Momin where he is seen questioning the love of the Almighty, his purpose and entire existence over all. Giving Alif an intense side and a source of learning, we are expecting it to be a purposeful watch for our young generation as well.

Alif is going to be Hamza Ali Abbasi’s return to the small screen after Mann Mayal. Also, it has been directed by Haseeb Hassan, famed director of Mann Mayal. He and Sajal will be sharing the screen for the first time.

Also, Hamza Ali Abbasi has risen our expectations especially when he tweeted that Alif  is his “PASSION PROJECT” and the message it aims to impart is close to his heart, which is of self-discovery and carving a path for yourself.

The cast Alif is is worth mentioning. From Osman Khalid Butt, Manzar Sehbai, Kubra Khan, Ahsan Khan, Sadaf Kanwal and Saleem Mairaj are enticing with dialogues crafted with love of women, love of God, love of self and others etc. Also, the exotic locations of Turkey are going to be a visual treat and give life to the deep rooted notions that are set at the heart of important questions such as who we are, where I am and where I am supposed to go. 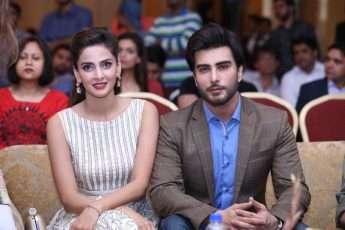 Imran Abbas And Saba Qamar Working Together On A Project