Pakistani media has grown quite inorganically in the past a decade and a bit. We had a phase of music channels but largely it has been restricted to news or to a degree drama/entertainment channels. There is absolutely nothing for children. Either they consume Western content on Ipads or binge watch Chota Bheem. With cinema’s revival too, we have seen this demographic for children ignored largely.

However, Dettol’s 3 Bahadur: Rise of the Warriors has been the exception. It offered quality entertainment with a message. The movie was made in partnership with Sharmeen Obaid Chinoy and Waadi Animations. It might not herald as path breaking like Chinoy’s documentaries but these are much needed outlets of fun for our youth. 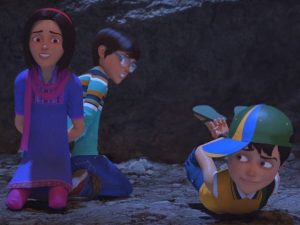 The whole premise of the film (slight spoiler) is being selfless. It is about surrender the me for the we! As a parent, especially mothers have a hard time trying to inculcate the idea of sacrifice or giving to children. As a child, we grow up trying to own things. My mama, my baba, my cat, my toy. Sharing and letting go is a concept alien to toddlers. The Dettol Warriors and the 3 Bahadurs teach your child how the greater good is more important than what is dear to you as an individual. The best thing, it is weaved into the story well that there is no long monologue about it. It’s an organic part of the story.

There are other small ideas that the film will certainly resonate with children. The integration of Dettol Warriors was well managed. Often brand endorsement can feel like you are being forced fed. With this film however, it is well knit with the overall story. It obviously has the message of cleanliness.

All in all, the movie is an important series. Not just because it offers something for our children but for the way it subtly incorporates messages in their story. Your child never feels lectured to, rather he or she would enjoy the story and these fun characters. Also, having a female super hero gives a message on its own! The ending leaves one question – what will the Dettol Warriors do? We are excited to hear on what’s going to happen with this question!