Desi family gatherings, honestly, for the most part are extremely toxic, if you keep the humor and choti choti teasing (read bullying) aside. And you know that brown people just love to have daawats and sending out shaam ki chai ke invites so they can gossip, whine about how expensive lawn ke joray are and yet buy them, and discuss endless susraali maslay and bachon ki shaadiyan!

Being a single girl, I have my countless reasons to avoid desi family gatherings, and it’s not because I don’t like them. Of course there are times when it’s all fun and LOL’s and games over lavish home-cooked food, but when these gatherings start with waisay kehna tou nahi chahye lekin… and finish with Oh choro ji, humein kia lena dena apki beti say, ALL THE WHILE I AM THERE, is my cue to run and never come back!

And if you’re thinking, read below to know what I mean and feel as a single girl on desi family gatherings!

Hamesha, there is that one creepy old dur ke uncle from your father’s side who happens to bump into you because someone made the grave mistake to invite their entire clan over. I honestly get uncomfortable with the “kitni bari or cute hogai ho. lagta he nai ke woh choti si bachi tum ho” followed by a stare that you can’t really explain. Those few minutes are the worst! *cringe/creep alert* 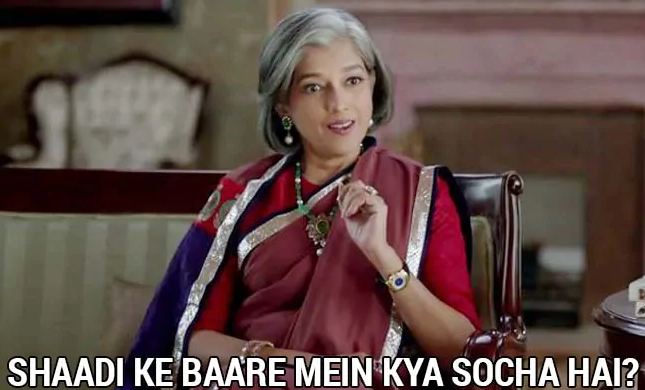 Girls often watch this filmi scene unfold right in front of their eyes when aunties find out that you’re 20 years old and your maa baap haven’t even started man-hunting for you. Like it’s such a crime that I’m single and unwed so you could come to my shaadi and complain about someone else’s daughter, haina?

WHEN A DUR KA RISHTEDAAR SAYS “WHY DON’T YOU PICK OUR CALLS?”

It’s true, I don’t pick up your calls and I don’t want to, because I was forced to give you my phone number when Ammi didn’t bring hers. So, now aunty, you keep calling me off and on and ask irrelevant questions (when I do unfortunately pick); Kia kar rahe? Kahan kahan jaati ho? Ajkal ke larkay larkian tu…. etc

I am so happy for you that your son is working his dream job of an Accountant in some finance firm in the UK and he makes you proud, but why do we have to hear about him and his achievements on every meet up? Maybe you should try to make an honest effort to learn about other people and their success stories.

My gen is kaamchor, nikaami, kaprey pehnay ki tameez nai, outings karalo insay, don’t know how to give seedha jawab, anti-social, kaali, gori, moti and what not, these discussion have become excruciatingly toxic to even hear. Because that’s all they do, complain, instead of figuring out the why’s, how’s and what’s! We are also doing a lot (like mentally ignoring your entire existence).