Act your age. We are willing to bet almost every woman over 30 has heard this phrase for one reason or the other.

Whether it’s related to how one dresses up, how one engages with people, or as simple as how loud one’s laughter is, we are reminded of how we should act our age every now and then.

And it doesn’t stop here, if one doesn’t conform to the pre-set behavior, demeanor and body language that our society feels is age-appropriate, words like psycho, desperate, wierdo are spewed callously and heartlessly by those who ‘know best’, and more so for women in the media. We say that, women should be given freedom to do whatever they want and at whatever age they want to in every sphere of life. I repeat whatever age they want to.

One such person is Bushra Ansari. A real firecracker and an entertainer, who has worked all her life essaying roles others would shy away from. She’s made us laugh, she has made us cry and it won’t be wrong if we call her a national treasure. In fact, two of her very famous songs, its my life and hayee meri anghoothiyaan very much explain her versatility. However, as unfortunate as it is, even she is not spared by the ‘age police’ who very quickly jumped to attack her after her portrayal of a Cool Daadi in a local ad (Waves Alpha Triplet Deep Freezer).

Some of the comments about her were so ridiculously narrow minded that it made us think why do we, as a society, hate everything we don’t understand. Why can’t we accept change, and if we cannot, then we should also not be in the position to pollute other minds. It is easy to criticize something while sitting behind the keyboard, especially when you don’t have any knowledge or experience of what is at hand, and then the negativity keeps rolling and gains momentum. This is how a society degenerates, through ignorance and hate.

World over women have worked to make a place where they are walking their own path, as they like, at any age, and we can’t digest a woman clearly playing a role with the intent of portraying a woman of a certain age, in a younger avatar, purely for laughs, and it doesn’t get any simpler than that. Whether you find the character funny or not is a different debate, but just going all daggers after an act is a pretty severe reaction. We wonder would the comments be any different if a male was playing the role of a Cool Daada? The scenario most likely would have been different and the criticism much less.

Going by this standard women like Oprah, Meryl, Rekha, Ellen, Iris, Madonna, who are celebrated for what they stand for and their contributions to society and entertainment, should also be bashed and put back in their age brackets. But good for the world they aren’t from around here, because hey, once you cross that age factor, please act it and wait for the end, because we can’t digest how happy they look.

PS. WE LOVE YOU BUSHRA ANSARI and you go act whatever age you feel.

Click on the link #ActYourAge to watch the full video.

PARFUM: THE BOOK VERSUS THE SERIES 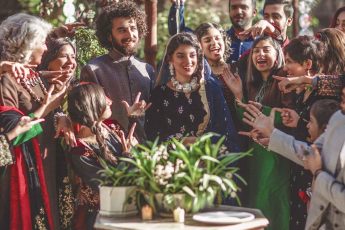 6 TIPS TO STAY MOTIVATED IF YOU'RE WORKING FROM HOME