Cannes Film Festival is among one of the most glamorous and biggest events of the year for the film industry. Annually this event is held at Cannes, France. The Festival aims to draw attention to the films that are meant to contribute to the development of the cinema along with raising their profile. The idea is to promote and give a significant boost to the film industry globally and celebrate it at an international level.

Sponsors of the event are also some big names like Renault, HP, L’Oreal Paris, MasterCard, Chopard and Kering.

This year, the following films are officially in competition at the event; Carol, Chronic, Dheepan, IL Racconto Dei Racconti, The Measure of a Man, Louder than Bombs, Macbeth, Marguerite & Julien, My Mother, Mon Roi, The Assassin, Son of Saul, Mountains May Depart, Sicario, The Lobster, The Sea of Trees, Our Little Sister, Valley of Love, and Youth.

Some of the more popular films that came from the Cannes Film Festival in the past include films like Pulp Fiction, Fahrenheit 9/11, Apocalypse Now, The Piano, All that Jazz, The Pianist, Taxi Driver and more.

What stands out from the festival apart from all the amazing films that are showcased is their red carpet. Unlike other red carpets this year [case in point; Met Gala 2015] the fashion we saw here was nothing short of elegant and regal. Like each year, this time around the red carpet at the Cannes Film Festival 2015 was a glamorous affair. We saw the likes of Aishwaraya Rai Bachan, Sonam Kapoor, Eva Longoria, Miranda Kerr, Julianne Moor and numerous more treading in gorgeous ensembles by Versace, Elie Saab, Dior, Ralp and Russo, Zuhair Murad and more. However, who made it to our best dressed list?!?! Here is a roundup of all our favorite looks from the Cannes Film Festival 2015. 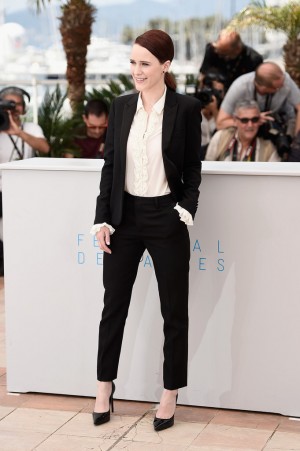 The House of Cards actress attended the photo call for her movie ‘Louder than Bombs’ in a power suit paired with power heels, a low pony tail with a side part yet finishing the look with hints of femininity added by the details on her white frilly blouse.