Dobara ep 10 kept us hooked throughout because with the way things ended in Dobara ep 9 and how Mahir was reflecting on Mehrunissa’s role in his life, a twist like what happened last night was bound to happen so these two would take their relationship forward.

Dobara has kept us hooked since it went on air is owing to its pace, refreshing story line, interesting developments, and lead actors’ performances. Hadiqa Kiyani and Bilal Abbas have been remarkable so far and both have justified their roles as Mehrunnisa and Mahir. However, Bilal Abbas Khan stood out last night with his performance and immaculate portrayal of Mahir and his feelings. 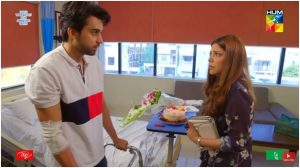 The most important development in the episode was Mahir proposing Mehrunnisa. While staying in the hospital Mahir felt lonely and this feeling was intensified when on his birthday, he had none to celebrate the day with. Narmeen also played a part in making him reach to this decision with her harsh words. Hence, when Mehrunnisa came to celebrate his birthday, he proposed her, which comes as a shock for her. Mehrunnisa’s reaction to that was expected as she rejected it instantly, telling him that she only befriended him thinking that he was alone and needed some attention, time and care. However, Mahir tells her that he actually likes her and would like her as her life partner. 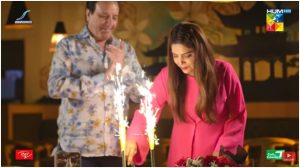 Things continue to get further intriguing in Dobaraas, after Mahir, Ibtisam also proposes Mehrunnisa the same day. Ibtisam takes her out for dinner, as instructed by his sister-in-law and there he proposes her which once again leaves Mehrunnisa in deep thoughts. She also reflects back at Mahir’s proposal but is unable to understand whether she should move forward with getting married a second time or not. This was something she hadn’t thought about but after the proposals, it seems, she will think over these lines.

The episode was an interesting one as it gave a new direction to the story. Bilal Abbas was phenomenal as Mahir as he portrayed all the thoughts and feelings of Mahir perfectly. Bilal is a versatile actor who can nail any character and in Dobaratoo he shows how much talented he is with his powerful acting. From that proposal scene to the one in which he shares everything with his friend, his expressions were on-point and he made us feel for Mahir.

Now that the serial is at an interesting point, will Mehrunnisa start thinking about the possibility of getting married and whom will she choose and why. To find out, keep watching Dobara on Wednesdays at 8 pm on Hum TV.