Feroze Khan is the hot topic of the town for the past few months. With Khuda Aur Mohabbat 3 winning hearts, Feroze Khan fans are desperate to hear about the upcoming projects of the actor. Season 3 of Khuda Aur Mohabbat has surpassed 1 Billion+ views on YouTube. This whopping high number of viewers has broken all the previous records in the Pakistani drama industry. Feroze likes to keep in touch with his fans one way or the other. This time, the actor has come forward with yet another surprise for us all. While his record-breaking drama is still airing, it looks like he is all set to return with another exciting drama project titled ‘Ay Mushte Khaak’. Eager to find out the details? So are we. Let’s have a look!

Recently, Feroze Khan surprised all of his fans by sharing the first look of his upcoming drama Ay Mushte Khaak. As per the revealed info, the drama is going to be an out-of-the-box story. With too many conventional scripts filling the space on TV screens, fans have been eager to find unique content. What makes Feroze Khan the right ingredient of the recipe is his blockbuster projects one after the other. 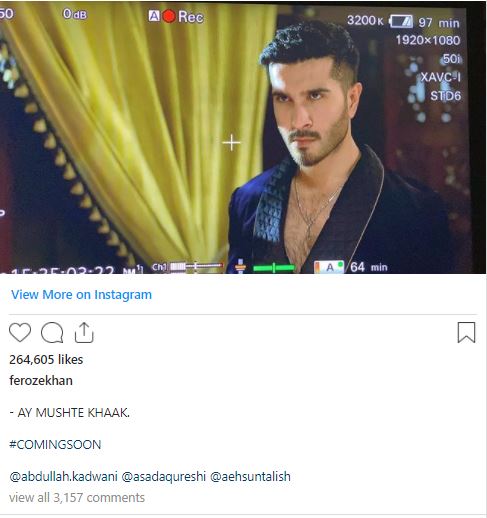 The Khuda Aur Mohabbat 3 star took it to Instagram to share the first look of his upcoming project with the caption that read, “AY MUSHTE KHAAK. #COMINGSOON”.

As per the actor’s shared post, his character from Ay Mushte Khaak is a smart young boy with a bit of an attitude dripping from his eyes. The silver locket around his neck and a lavish outfit portray an individual that comes from a very rich background. He might also have some arrogance in his body language. However, the first look does not reveal much about the character’s nature as much as the physical appearance.

While this may be valid, we can safely presume to see a contrast from what we witnessed in Khuda Aur Mohabbat 3.

Wondering why we are calling it an out-of-the-box story? Ay Mushte Khaak will be featuring Feroze Khan as a rich boy who does not believe in God. While this may be true, let’s not confuse the character with being an atheist. The story of the drama reflects how the rich boy has lost belief. However, going through a list of experiences in his life, he finds a way to reconnect to God.

We are very excited to share the details of the drama plot with you. Stories like these can throw light on perspectives that usually rest in the dark. We applaud Feroze Khan for always coming back with projects that make a difference in the current era.

To find out more details of the drama, and to stay updated with the latest happenings, keep following us!