[tps_header]Quite some time ago we did a post on what really the Met Gala is. If you still don’t know, might be a good idea to click that link before moving on. Done? Good, now read on about this years theme and its relevance and irrelevance as seen on the red carpet.

The costume institutes theme for the year was Rei Kawakubo/Commes des Garcons: Art of the in between. Now you may ask who Rei Kawakubo is? Probably the most trending hashtag since last night, but she is also a Japanese fashion designer based in Tokyo and Paris. She is the founder of Commes des Garcons which is French for ‘like some boys’, and as the name suggests, it is the blending of things, it is the in between, the space that gives birth to creativity and beauty. Kawakubo masters the art of fusing the Japanese and western influences , using deconstruction as a technique. It goes against all notions that may overly sexualize a woman’s body, but would reveal the most unusal parts of her, which are not expected, hence ‘like some boys’, it dares to go against the norms. It is androgynous, edgy using heavy structure and volume in creating its distinct aesthetic. As Kawakubo said,’For something to be beautiful, it doesn’t have to be pretty,’ which is befitting to her sense of design.

Now having known that, you may understand how appalled I was at seeing the Met Gala red carpet. And though it isn’t stated that you have to follow the theme, it is deeply encouraged. While there were some who might have brought their own interpretation of Art of in between, there were most who probably just missed the memo.[/tps_header] 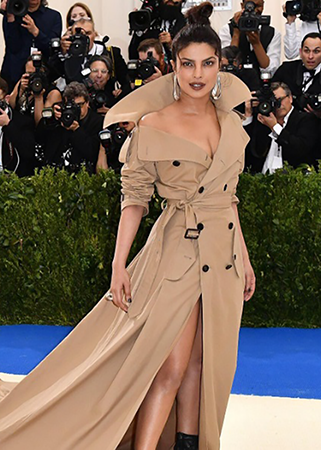 We talk about her first because she’s from the neighborhood. While I understand that she was in between by making a tench coat into a dress, there was nothing inspiring or Kawakuboish about that look, The failed attempt at the brows and bun was borderline insulting.