Meri Guriya is a Pakistani drama that is about a hushed, bitter truth of our society that is child abuse. Over the past years, there has been an alarming number of cases. Therefore, a need arose to shed light on this social issue and consciously make parents, guardians and children aware of potential danger.

The show unfolds with the discovery of a little girl’s body in the woods. Immediately the worst is confirmed. The child has been raped and murdered. Many eyes shed tears as the distraught mother comes onscreen. She has to identify the body.

Inspired by a real-life incident, this Pakistani drama has it all. Sania Saeed plays Shehnaz, as a wilful yet typical mother who loves her daughters. She believes in empowering them through education. Despite constant objections posed by her mother-in-law, she keeps fighting for what she believes in. Sonya Hussyn plays Safeena, who is a State level badminton champion and a thorough feminist. She gets married to Dabeer (Mohsin Abbas), despite her wishes. Nonetheless, she continues to pursue her dreams. Lastly, Mohsin Abbas Haider plays Dabeer. He is an apparently meek character generally liked by all around him. However, behind his seemingly harmless personality has an evil side. He is a child molester. 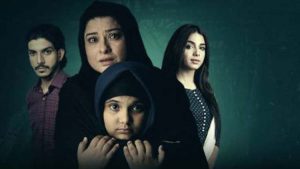 The drama also highlights other societal flaws. For example, not letting girls come forth with accusations of being mistreated. It talks about being blindly loyal towards your kin even if they are doing wrong.

Overall, the show is more than entertainment. It has an important message about the evils that prevail in our society. Meri Guriya tells us how we can minimise them by being better guardians for our kids. It especially encourages young women to stand for what they believe in.