We’ve stepped into 2017 with yet another wedding season, and it has grown bigger and crazier. And if you want to get into the zone on your big day, you will need to have an absolutely killer Pakistani Wedding and Mehndi Songs right from the entrance song to the luddi song on your mehndi night, and then the after party! So, let’s bring it on! wedding playlist

Scroll though, because we’ve round up some of the best and trending Pakistani wedding tracks that you need to be playing on your SHAAAADI right now to kick start your new life!

Billo Hai is an effervescent Punjabi track by Sahara feat. Manj Musik & Nindy Kaur and is going to be the “Wedding song of the year”. With a club mash up zing in the beat of the song, we will be grooving to this track all night, and maybe, ring in New Years as well.

Aya Laariye is a traditional folk Punjabi wedding song and a perfect mix of rock and funk that immediately turns into a buoyant track with a traditional feel of being an ultimate wedding song by the power house Meesha Shafi and Naeem Abbas Rufi. Written by Saeed Gilani, telling the bride-to-be that her groom is has come to wed her. So if you’re looking to add an extra punch on your wedding jam, Aya Laariye is made for you!

Originally sung by the mellifluous Musarrat Nazir and released in 1993, there are several remixed versions of this song to-date, upping the tempo with dhol, but if you have listened to the original song, then we think you need to give it a listen. This traditional Punjabi folk song is an absolute favourite for luddi’s on mehndi nights.

Nouman Kahlid’s Desi Thumka is a dance/electronic track and is already popular, so if you want to dance to a Punjabi beat, put on your dancing shoes and gear up to the rapping of Osama Com Laude and revel in the anticipation of seeing your lover as the song suggests.

Sung by Zarish Hafeez And Shiraz Uppal, Lar Gaiyaan is a festive and peppyshaadi song with a guy and girl teasing each other, and a decent song to choreograph for your family and friends on your dholak!

Ballay Ballay is an absolutely sweet Punjabi song sung by Shiraz Uppal and Harshdeep Kaur, and is a perfect track for you and your friends to sway to, on a mehndi since it’s speaks about joy, excitement of knowing that your lover is going to whisk you away. Dreamy eh?!

This magical song is an acoustic serenade that was orchestrated into an unplugged version of the qawwali “Afreen Afreen”, and is an apt track to play as your “entrance song” on your big day. The song, with each step you’ll take, will grow into a beautifully sung ballad full of heart and emotions. How does that sound?

A celebratory punch, Naach Naach ke sung by Shani Arshad for NMA2 is also yet another trending wedding Punjabi song for you to set the pace of the shaadi night for you and friends who love to party and live up to the essence of desi cinema.

If you’re looking to dance till you drop on a Punjabi bhangra track, the club mix sound of Nach is radical and groovy enough to make anyone dance on this track with its different beats taking the sound high and low to set the pace right!

Kala Dooriya is a house mix of the original song sung by Shazia Manzoor and talks about the relationship of a bride and her younger brother-in-law. The song will set into a deep house mix that will make you want to show your swag, and at the same time perform the sassiest bhangra!

JUNAID KHAN HAS SUNG ALL YOUR FAVOURITE OST's 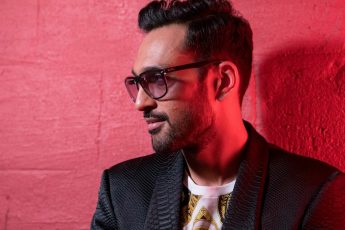