Finally! Just a week more to go and Game of Thrones season 8 is just around the corner. GoT loyalists shall get their hands on the last season of this epic show! The latest season may be coming out after a considerably long hiatus but didn’t stop the show’s fans from dissecting every little scene from the previously released seasons in order to gauge what Season 8 holds in store for them. Amidst the absolutely crazy theories flying around, and wild speculations, we have gathered some interesting predictions for Season 8. Let’s see which ones come true!

IS SAM A TARGARYEN? 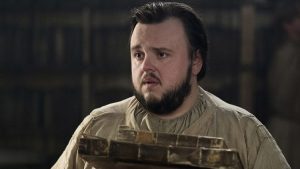 In George R.R. Martin’s A Song of Ice and Fire, Azor Ahai is a legendary figure “who fought against [the darkness] with a red sword” and “arose to give courage to the race of men and lead the virtuous into battle with his blazing sword Lightbringer.”

We think Sam might well be a secret Targaryen, (the child of Rhaegar and Elia Martell – his first wife). This child was smuggled away by Varys and sent to the Tarlys: one of the most faithful families to the Targaryens.