Sinf-e-Aahan ep 9 was yet another fabulous episode that covered some aspects of the girl’s military training and at the same time, it also highlighted some elements of budding friendships and competitiveness to do their best. However, for me the crux of the entire episode was in the last 2 minutes in a private dialogue between Major Osama and his wife Kiran and their definition of who can be a “hero”.

The script of Sinf-e-Aahan is relevant in today’s time and strongly advocates on the strength and resilience of what girls can also do if they’re provided with the drive, support and encouragement to live their dreams. 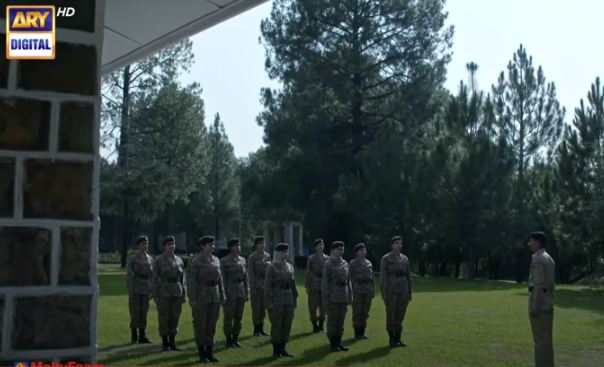 THE GIRLS ARE LEARNING A NEW WAY OF LIFE

Last night’s episode was a another day of training that led to make each and every individual rely on their strength and to discover their potential. They are being taught to live a disciplined life by getting up after falling, to keeping their surroundings clean and groom themselves to be future leaders in the PMA.

I like how there’s a streak of competitiveness amongst the girls but there is also support and the expression of “being there” for each other in their own ways to show “ive got your back”.

KIRAN RECALLS HER PAST

I’m glad that we got to delve into some parts of Kiran’s past because we weren’t really clear how she and Major Osama ended up as a couple. Her marriage to Major Osama was a result of a loss of a loved one (or maybe Osama’s brother? *just an assumption*).

MAJOR SAMIA IS A CHAMPION

I thoroughly enjoy the screen time that Major Samia gets as she leads the training. Her personality to her dialogue delivery and body language is remarkable and she adds a comical element to it which makes it all the more relevant. So far, we are enjoying her character a lot.

Sinf-e-Aahan ep 9 was a seamless watch with great comic timing from all the leading as well as supportive characters from the PMA as well. And can we just saw how overwhelmed we feel every time we hear Asim Azhar’s voice in the background? Truly magical!