This year’s theme for International Women’s Day (8 March), “Gender equality today for a sustainable tomorrow”, explores the ways in which women and girls are leading the charge on climate change adaptation, mitigation, and response around the world, contributing powerful leaders and change-makers to a more sustainable – Google

UNDERSTANDING HOW YOUNG GIRLS & WOMEN ARE EFFECTED DUE TO CLIMATE CHANGE

“Today is gender day because gender and climate are profoundly intertwined. The impact of climate change [affects] women and girls disproportionately,” he said, urging to empower and support women.

Little Amal, and the Syrian girls it represents, are not alone in their distress: 80 per cent of the displaced by climate related disasters and changes around the world are women and girls. 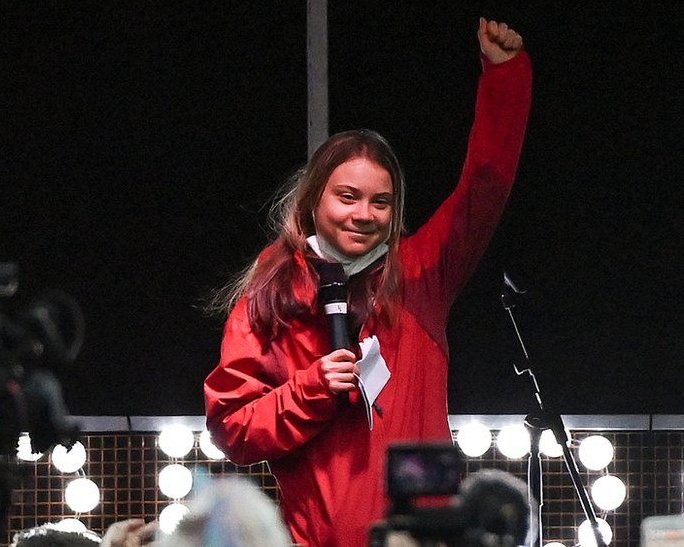 Greta Thunberg has become one of the world’s foremost environmental activists over the past year through her weekly Friday for Future protests. The 16-year-old has been nominated for a Nobel Peace Prize for her work, has spoken at the World Economic Forum and in front of the European Parliament, and sparked a protest movement involving millions of young people worldwide.

Thunberg is best known for her bracing clarity. When she speaks about climate change, she’s downright honest and brutal with her words without downplaying the situation, and neither does she take it easy on her audience. With a calm tenacity, she holds people and governments accountable and demands an end to fossil fuel use. 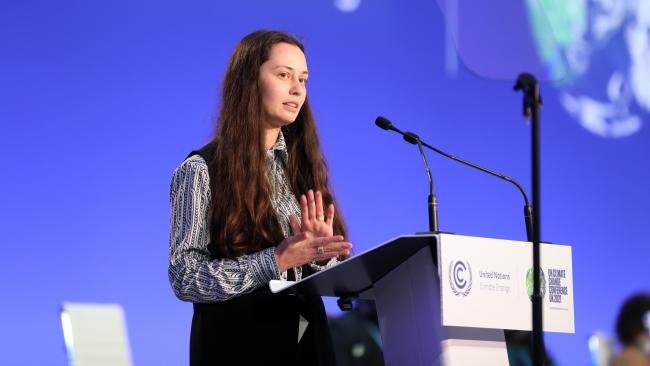 Though their efforts have often gone unnoticed, Indigenous people have always been at the forefront of environmental causes around the world.

The youth activist India Logan-Riley is working to center Indigenous rights in the movement for climate justice by ensuring that Indigenous people gain rights over their land. She’s taken her message to the United Nations in talks that resulted in the Paris climate agreement, and she works as both an activist and conservationist in her native Aotearoa, which is the Māori name for New Zealand.

Globally, 2.5 billion people depend on land held by Indigenous people for food, water, air quality, and more. These critical ecosystems are often protected against extractive industries by indigenous groups, and deforestation rates on these lands are typically half the global average, according to the World Resources Institute. 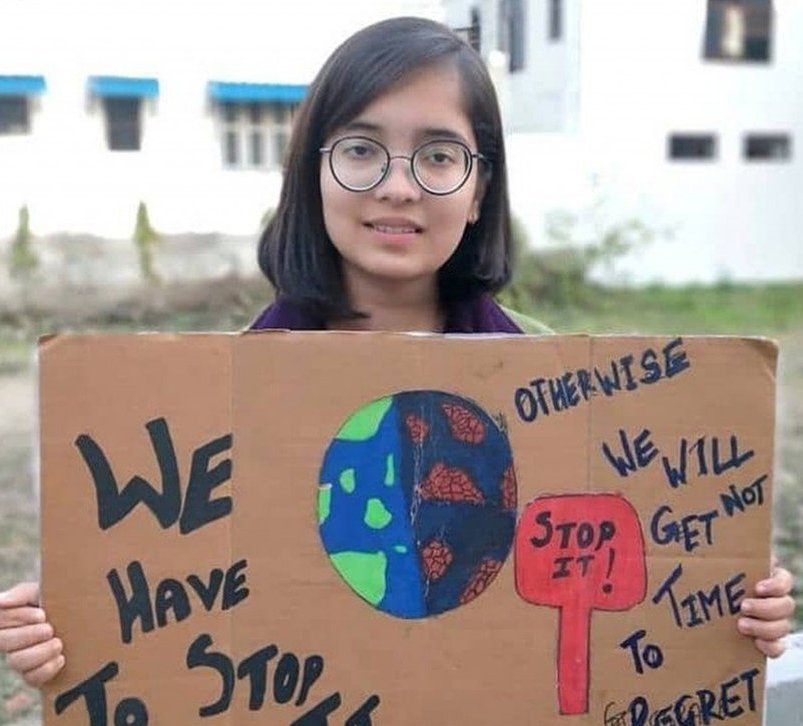 Most young children spend their time playing outside, but at 9 years old, Ridhima Pandey was busy because she decided to file a lawsuit against the Indian government for failing to address climate change back in 2017.

Her lawsuit was part of a growing legal movement to hold governments that have failed to act on climate change accountable. The movement is driven by young people who see climate change as threatening their ability to access their basic human rights to things like food, water, and a safe place to live.

In her lawsuit, Pandey called on the government to reduce greenhouse gas emissions, develop a carbon budget strategy, and create plans for recovering from the effects of climate change.

“My government has failed to take steps to regulate and reduce greenhouse gas emissions, which are causing extreme climate conditions,” she wrote in her petition. “This will impact both me and future generations.” 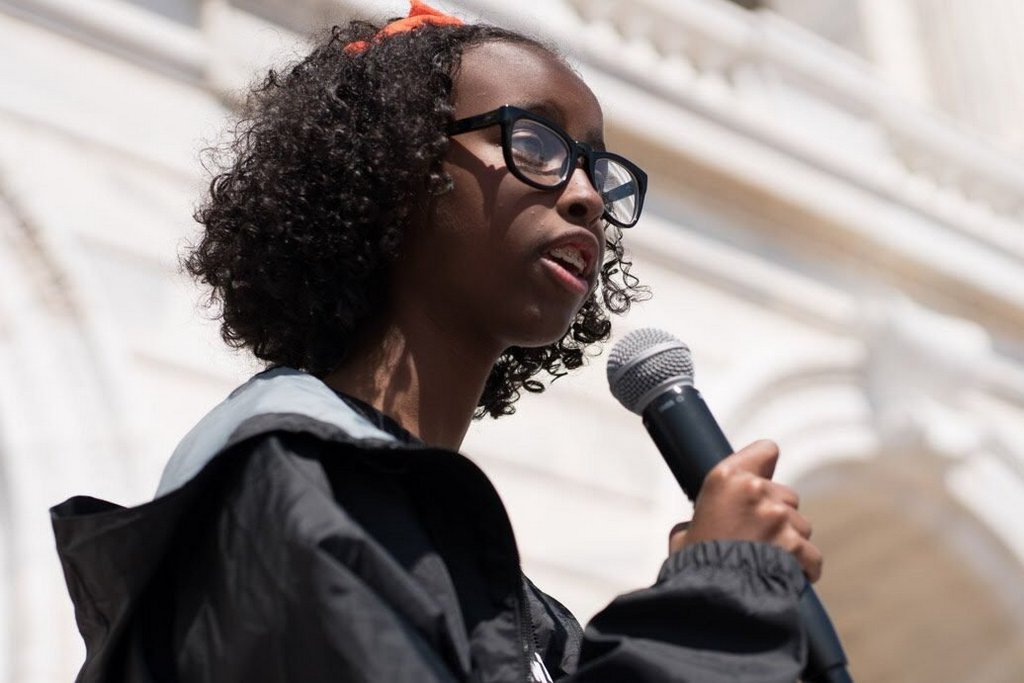 Isra Hirsi is mobilizing her peers in support of bold climate action. Hirsi was one of the lead organizers of the first-ever Youth Climate Strike in the US. The budding activist is pursuing climate justice by raising awareness about environmental racism. She wants to ensure that any climate action prioritizes communities of color and those likely to be marginalized, who are often disproportionately impacted by climate change.

“Climate change mostly affects communities of color and low-income communities, and these people live in these areas under these conditions, and we don’t really do anything about it.”

“I think people of color are automatically ignored. It’s also important to advocate to people who aren’t fully aware of the problem to make sure they take a stand and come together because climate change affects all us,” she added. “We all have to come together at some point.” 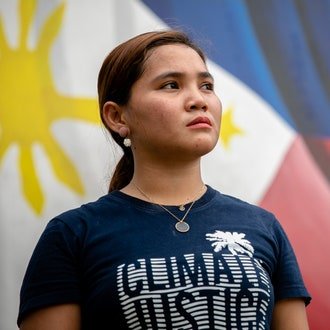 Some of Marinel Ubaldo’s friends and family were killed and her home was destroyed by the powerful cyclone in 2013.

The tragic event prompted Ubaldo to dedicate her life to fighting for climate justice. The Philippines is extremely vulnerable to cyclones supercharged by warming oceans and rising sea levels. As a a fisherman, Ubaldo’s father and his livelihood are endangered by climate change — so the issue is one that is very personal to her.

In 2018, she traveled to New York to speak in front of thousands of people gathered to protest environmental injustice.

“I’m here in front of you, not just as a climate statistic you see in the news, but I’m here as a human being  —  hoping to remind you that we need to value lives again,” she said at the event. “My story is only one of many, and I’m here to speak on behalf of the vulnerable and the marginalized communities  —  may our voices be heard.” 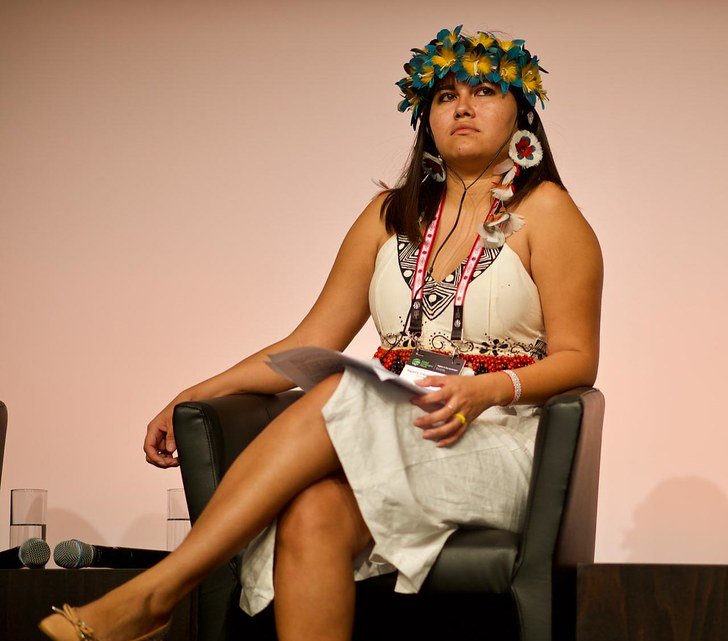 Brazil is often the site of the biggest fights for climate justice — it’s also the deadliest country in the world for environmental activists. Since President Jair Bolsonaro took office last year, the country has seen a sharp spike in deforestation throughout the Amazon rainforest, which helps to regulate the global atmosphere, and indigenous land rights have been trampled.

Rayanna Cristine Maximo Franca’s activism centers primarily on women’s indigenous rights, but empowering women is also critical to protecting the environment. Women are most likely to be negatively impacted by climate change, and educating women is one of the best ways to mitigate environmental consequences. In Brazil, indigenous activism is tightly entwined with environmental causes, where indigenous groups have long struggled for access to land and resources and advocate for the protection of the Amazon. 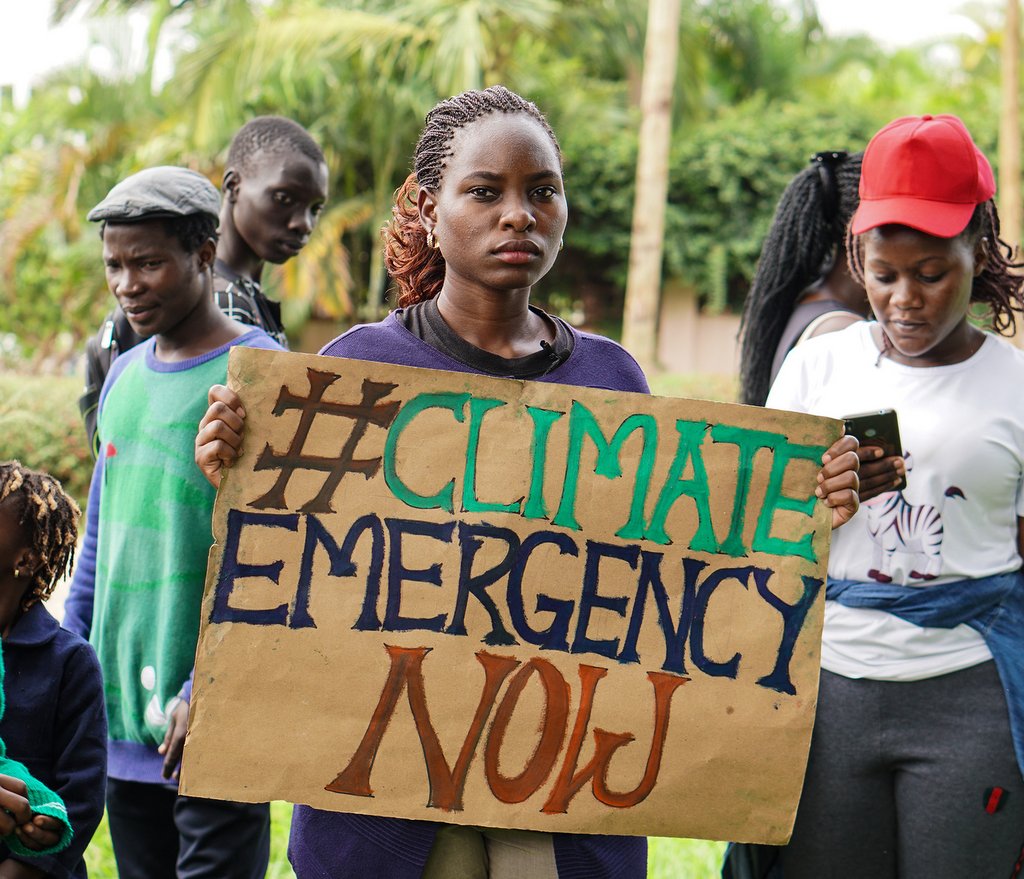 Around 77% of Uganda’s population is under the age of 30, and a growing youth movement has emerged around the issue of climate change and environmental sustainability. 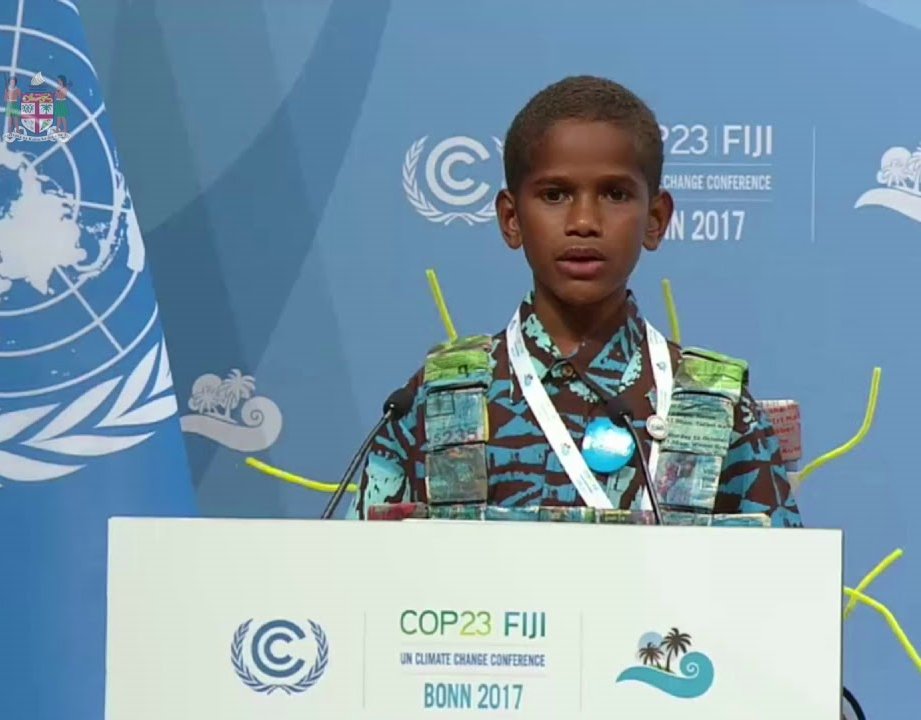 Few countries are more exposed to climate change than Fiji. The low-lying island nation could be submerged in the next few decades as  sea levels continue to rise.

At the UN’s COP23 climate talks in 2017, Sakshi was the youngest speaker present. Despite her young age, she delivered a sharp call to action, urging world leaders to stop the release of greenhouse gas emissions into the atmosphere.

“This is the time to do something to slow down the rising of sea levels,” she said. 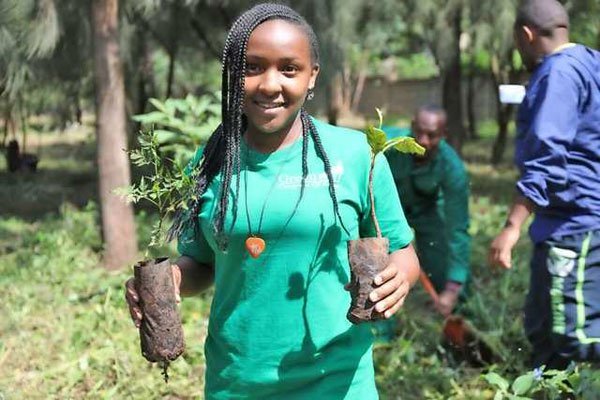 In 2006, Winnie Asiti got her first taste of climate activism when she attended the UN’s climate change negotiations in Nairobi, Kenya. Five years later, she helped form the African Youth Initiative on Climate Change and she now advises the Global Greengrants’ Next Generation Climate Board, an organization that gives loans to environmental activists and causes around the world.

“It’s not just about the COP because our vision is to go beyond [it],” she told Voice of America. “We want these groups to be able to make the linkages between the local, regional, international processes so that even when they come to the COP, they are able to take that knowledge back home and be able to link their own local activities, original activities, to what is happening at the international level.” 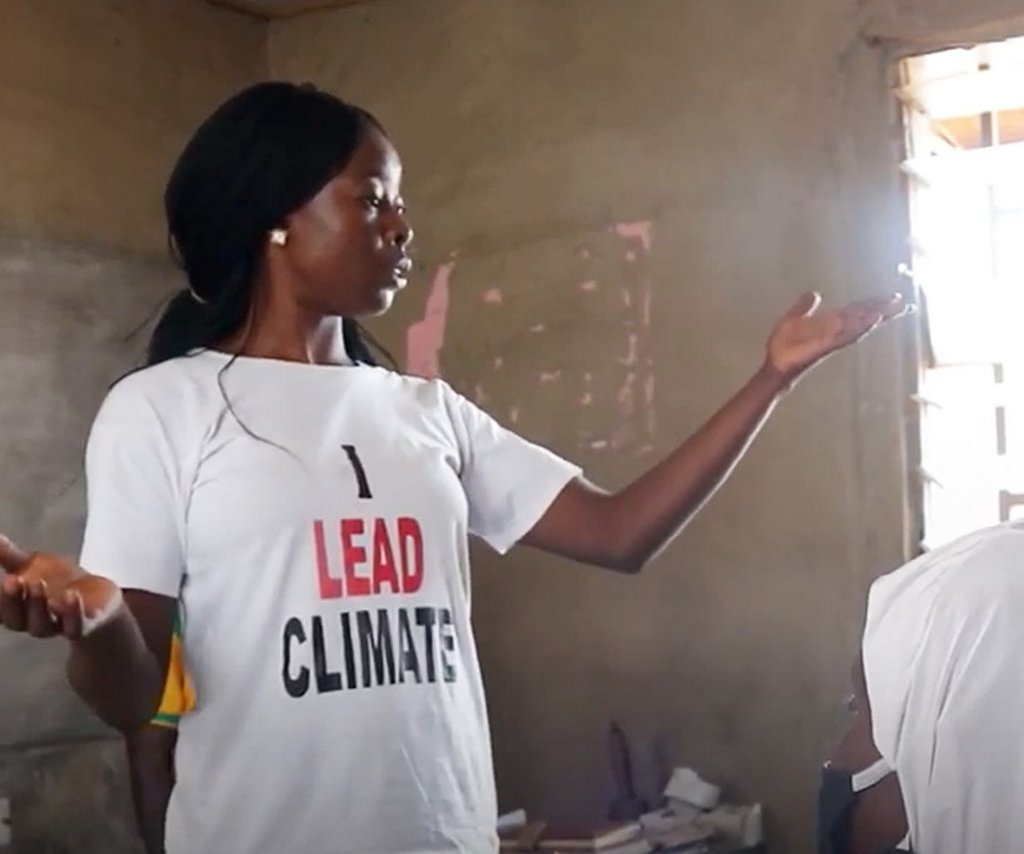 Oldaosu Adenike tirelessly campaigns for the planet. Going by the title “ecofeminist,” Adenike is an organizer for Nigeria’s Friday for Future climate marches and is active on Twitter where she educates her followers on the complexities of climate change and calls on young people to push for climate action.

“One of the reasons why the ‘climate’ is becoming changed and subsequently leading to crisis (sub-crisis) is because of a lack of youth planning in their tomorrow,” she wrote in a blog post. “Their voices [need] to be heard on critical or burning issues of the moments such as climate change.”

Disclaimer: We have sourced all the information above through multiple online sources and do not claim rights over the text.