HIDDEN MESSAGES IN THE EMOJI LANGUAGE YOU NEED TO KNOW

Text speak has been around for over two decades and I have just only caught up with the majority of abbreviations. Needless to say, I prefer to send two text messages that are properly typed. I am not a big fan of text speak. However, as it turns out, Emoji is a language unbeknown to me till I received a text with just emojis. As someone who rarely uses emojis, save for the poo emoji (I am not that old) and prefers typing the smile emoji =), I find it hard to decipher messages composed in part or wholly of emojis. Apparently, break-ups, make-ups and flirting are all done in fluent emoji now. I am someone who finds the entire shift from text speak to emoji challenging. Of course, emojis mean what they actually show, but there is a whole other subculture that uses mostly emoji language to communicate.

Dating websites and universities have conducted studies based on emoji usage. One study shows that emoji users go on more dates and are twice as likely to get married. The same study also shows that 62 percent of emoji users want to get married compared to the 30 percent who do not use emojis. (let’s not tell Pakistani mothers this- they will insist on emoji usage in awkward rishta encounters!!!).

If you use an emoji with a nose, you are more likely to get a response than using one without a nose, which actually makes you 66 percent more likely to be ignored. I mean who knew this?  Strange how the human mind works! Without further ado, here are some of the most popular emojis I have incorrectly used since we were gifted the full emoji language keyboard! 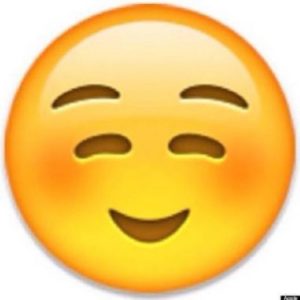 All this time I assumed The Blush Emoji is having a seizure due to which its lips are all wonky, turns out, it’s a blush with a peck on the cheek. Now I’m regretting the handful of times I have used it. Did not intend for that to happen- AT ALL.