With different promos of an upcoming drama going on air on regular basis, viewers set their minds on imagination about how the story will be turning out. As we know that HUM TV is bringing us a scrumptious treat of exciting serials with an amazing cast these days so, one of the most awaited dramas was Hum Kahan Kay Sachay Thay. The drama has kicked off today with an interesting episode introducing all the characters and giving us an outline of the story. The super-talented Mahira Khan, Usman Mukhtar, and Kubra Khan are going to nail this project with their excellent acting and characters they are playing in the serial. Here is a glimpse into what happened in today’s episode!

The first episode of Hum Kahan Kay Sachay Thay has unveiled the background story of the characters which makes us think of what will be happing in the upcoming episodes. The story begins with the childhood of the characters named Mehreen, Mashal, and Aswad. All three of them are related as first cousins.

Rabia, played by Laila Wasti, is Mehreen’s mother, Huma Nawab as Saliha, is Aswad’s mother while Kubra Khan as Mashal is the daughter of Rabia and Saliha’s only brother named Tahir. The bonding between siblings is supportive for each other yet we can observe a clear sense of jealousy.

The Reality Behind Mehreen’s Misery

As the story progresses, it reveals that Mehreen’s life is not as simple as it seemed at the start of the drama. Her mother finds out about her father, played by Omair Rana, that he is drug-addicted and is accused of theft. Moreover, he is soon to be a target of trial for committing fraud of around 20 lac in his office. The heat-picking everyday fights and concerns at Rabia’s end following her future are brought to discussion in front of her brother Tahir and mother. They are ready to support Rabia however, no one is concerned about the minor soul Mehreen, who is already disturbed to know the reality of her father. She is unable to accept everything chaotic going around.

The first shocking thing that has already glued viewers to the drama story is the suicide of Mehreen’s father. Being one at fault, he chooses death over court trial while leaving Mehreen in trauma for good. The scene takes a shift to the grown-up university-going Mehreen who is living with her maternal grandmother. It seems that time and circumstances have added up bitterness to her way of talking and behave. However, she is the same example setting intelligent and efficient Mehreen as she was during her childhood.

What’s Wrong Between Mashal and Mehreen? 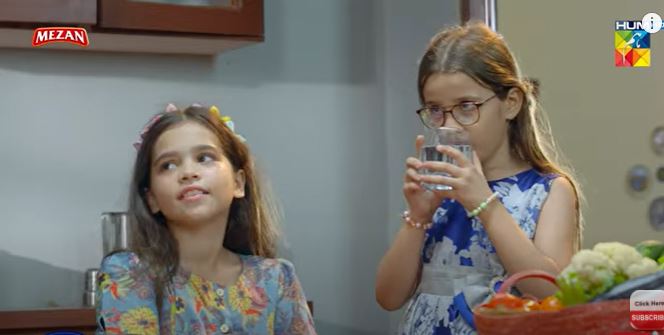 You must be thinking about what’s wrong between Mashal and Mehreen. So, the story seems to revolve around a silently growing rivalry due to jealousy between cousins since childhood. Mashal has always been the one who was degraded in front of everyone in comparison to Mehreen. There is something she has been holding since childhood in her heart.

Now as grown-up cousins, Mashal has a lot to boast of. Moreover, it seems Mehreen’s mother got married for the second time while leaving her with her maternal grandmother.

These circumstantial traumas carried forward with every member of the family have changed things between them for the future. Besides, it is yet to see who is going to be Aswad’s favorite to think about as a life partner.

So, there is a lot to reveal in the coming weeks. Don’t forget to watch Hum Kahan Kay Sachay Thay every Sunday at 08:00 PM only on HUM TV.
Share122Tweet76Share30