(On July 22nd, the fashion parade descended upon the Manzil Hotel in Downtown Dubai to see Suket Dhir and Taller Marmo being announced the regional winners for the International Woolmark Prize 2015/16 for menswear and womenswear, respectively. Read on for a brief history of this prize and details of the regional which saw our own local talent represented by Sania Maskatiya, Misha Lakhani, and Republic by Omar Farooq. )

The International Wool Secretariat (IWS) was formed following the daring decision by Australian woolgrowers in 1936 to impose taxes on each bale of wool produced in order to promote their product globally. Fast forward to 1953 – the launch of the prestigious Woolmark Prize by the IWS to highlight the versatility and modernity of wool. It has included, then unknown designers, Karl Lagerfeld and Yves Saint Laurent as the winners in 1954, judged by a panel including Hubert de Givenchy Pierre Balmain. As time passed the growing popularity of synthetic fibres posed great challenges against pure wool and in retaliation the Woolmark label was born, under Sir William Vines. The iconic logo(the five black bands criss-crossing to form a skein-shape) designed by Italian graphic designer Francesco Saroglia in 1964 still remains one of the most well-known and well reputed brands globally. 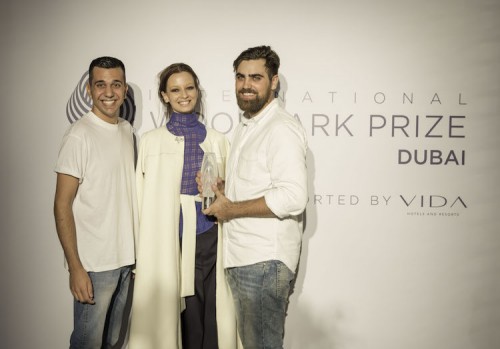 The Woolmark Company Managing Director Stuart McCullough explains: “With the number of countries represented the largest yet, the International Woolmark Prize is a truly global celebration of emerging talent and most importantly provides the winning designers with a unique opportunity for commercial success on a global scale.”

The annual prize has two categories from each of the following six regions: Asia, Australia, British Isles, Europe, India-Pakistan-Middle East, and USA. The Dubai event saw an interesting mix of 11 nominees from our own local talent, Indian, as well as Emirati and other parts of Middle East. The regional winners, Suket Dhirt and Taller Marmo, will go on to compete in the international finals – Florence in January 2016 for menswear and New York in February 2016 for womenswear. The next few months will see the winning designers developing a capsule collection in Merino wool that will be showcased at the aforementioned events by all twelve finalists.

Nez Gebreel, CEO of Dubai Design and Fashion Council, commented, “This is a prize that educates and supports designers throughout the design process in its entirety, aligning with the council’s mandate to nurture emerging talent so they have an opportunity to flourish. I was extremely impressed with the creativity of the finalists and how they incorporated Merino wool into their designs; the designers have created pieces which truly demonstrate the wealth of talent we have in this region.”

We, at SiddySays, are proud of the designers who represented Pakistan – Sania Maskatiya, Misha Lakhani & Omar Farooq of Republic in the regional finals and wish the winners good luck with the upcoming events. Our local talent showcased at a global platform this time and we are sure they will do so again in the future.

MEGHAN'S OBSESSION WITH THE BOAT NECK