Dekh Magar Pyaar Say has a dream like quality,  with a somewhat theatrical feel to it as it cleverly keeps the landmarks of Lahore well in view, so in a sense you take a tour around some of the beautiful and iconic locations including Jinnah Library and Mall Road. The movie has some twists and turns, emotional roller coaster, with humor and music along with fun cameos from HSY, Humayun and Meera added to it making it a classic Rom Com.

Debuting your career with a romantic comedy is a  bold move and Sikander has done a good job. Humaima is her usual charming and gorgeous self. Humaima and Sikander had evident chemistry, which made their pairing stronger – with the latter being the perfect portrayal of a shy chocolate hero. Humaima played her sassy, dramatic role really well and it is definitely worth seeing. 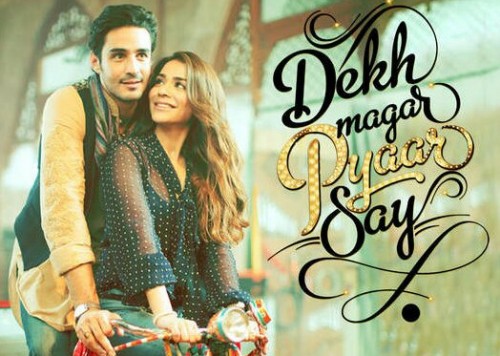 The movie’s direction is strong accompanied with unparalleled cinematography by BAFTA-winner Nic Knowland (Jinnah, Immaculate Conception). The story and script, headed by Saba Imtiaz, was fun and pleasant to watch. HSY has taken the lead with the costumes, with an elegant opulent feel to it – good reflection of Lahore. The team crossed with the wardrobes, the jazzed up rickshaws, the driver himself (SIKKI!), but it was all intentional – a kind of escape from reality. The music was good with a few tunes that might stick to one for sometime with the title song and the Love Theme by Abbas Ali Khan which gave a very intimate and French feel to it. Amna Ilyas’s appearance in the dance number ‘Kaala Doriya’ had a nice jingle to it minus the OTT dance moves which was refreshing. We, at SiddySays, recommend you go watch the movie and enjoy it, and most importantly support your local cinema – our support is what will allow it to progress.

Dekh Magar Pyaar Say is a step in the right direction to hopefully revive the Pakistani cinema. It has good looking actors, a good sound track, glamorous clothes, unexpected cameos, killer thumkas and an easy to follow storyline!