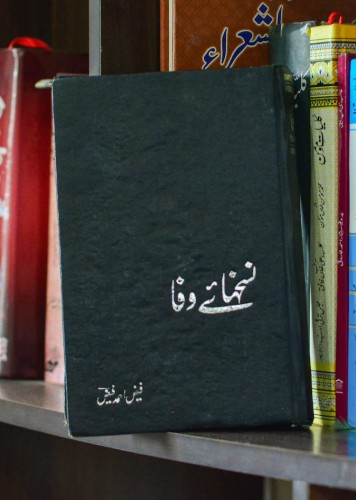 Faiz is considerd by many as one of the greatest poets of modern era. Nuskha Haye Wafa is a compilation of his eight books Naqsh-e-feryadi, Dast-e-saba, Zindaan nama, Dast-e-tah-e-sung, Sar-e-wadi-e-Sina, Sham-e-shehr-e-yaaran, , Mere dil mere musafir and Ghubaar-e-ayyam. His poetry was written in various different phases of his life: as a youth in Lahore, as a teacher, as a military officer in the British Indian Army, from behind bars and from exile. Faiz’s revolutionary poetry still resonates in our country and seems relevant every time we hit a crisis. Rendition of Faiz’s poetry by famous singers achieved enormous popularity as well. Who can forget Mujh se Pehli Si mohabbat by Noor Jehan and Gulon mein Rang Bharay by Mehdi Hassan and Dasht e Tanhai by Iqbal Bano and Bahar Ayee by Tina Sani and so on and so forth. The kind of fan love Faiz enjoyed during his lifetime (and even now) is indeed exclusive to him.